This article is about the creature from Heroes of Might and Magic V. For other uses, see minotaur.

Along with the other Beastmen, the Minotaurs, half-man and half-bull, were created by the Wizards of the Seven Cities as replacement for the Orcs. They fled east, and underground, to earn their freedom, but they were later conquered by the Dark Elves and once again bound in chains and muzzled. In the Dark Elf society, the Minotaurs are used as menial labour to perform the most degrading and tedious tasks. Despite this treatment, the Minotaurs are known for their bravery and dignity. They will perform any task to the utmost of their ability, including fighting for those who treat them as slaves. They hope some day to earn their freedom; the Dark Elves fear that some day, they will seize it instead.OffBck

The minotaur is the third-level creature of the Dungeon faction in Heroes of Might and Magic V. It can be upgraded to minotaur guard and minotaur taskmaster. It has high hit points, and is an okay fighter. The ability Bravery ensures that it will never have less than +1 Morale.

One great use of the minotaur is protecting the ranged attackers like scouts and shadow witches.

Bravery - Creature always has positive morale (no less than +1).OffBck 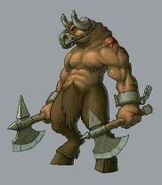 Minotaur's concept art
Add a photo to this gallery
Retrieved from "https://mightandmagic.fandom.com/wiki/Minotaur_(H5)?oldid=117097"
Community content is available under CC-BY-SA unless otherwise noted.