This article is about the creature from Heroes of Might and Magic III. For other uses, see minotaur.

The minotaur is the fifth-level creature of the Dungeon faction in Heroes of Might and Magic III. It can be found at the labyrinth. The minotaur can be upgraded to the minotaur king.

Minotaurs and minotaur kings live in labyrinths and devour all who enter. These bull-like humanoids are sure of their ability to dominate in battle and have good morale. This self image is well-founded as they are durable and have a very damaging axe attack.OffBck

It is a great frontline fighter, and the minotaur always has positive morale. 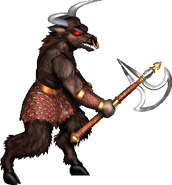