Might & Magic: Duel of Champions is a free-to-play trading card game available on Steam or via the game's website, as well as on the iPad app store. It is available for cross-platform play.

The focus of the game is to kill the opposing hero. Each hero has a deck, called library, of 59 to 209 cards, containing 1 hero, 8 event cards, and 50-200 in a combination of creatures, spells, fortunes, and buildings. After logging in, the player can choose a starter deck, and is assigned a random banner.

Each player starts with their hero in play. The hero determines the deck's faction, the spells, and the initial levels for might, magic, and fortune. Each turn, the hero gets one more point of resource that can be used to play creatures, spells, and fortunes, and the hero can use one of its skills. One skill that every hero has is to increase the might, magic, or fortune level by one. They can also draw a card for cost of 1 resource.

Creatures line up in rows, melee creatures in the front lines, shooters in the back, and flyers in either. They can attack and use their skills to kill other creatures and potentially the enemy hero. They require might levels to summon, although some also require a certain magic level. Spells and fortunes have instant or ongoing effects and require magic or fortune respectively.

The player can use tokens that increase gold or experience rewards, earned through battles. Both last for 60 minutes. The gold increase is 50%, while XP value is doubled. After reaching ELO rank 200, the player can also participate in tournaments, by paying 1 ticket. 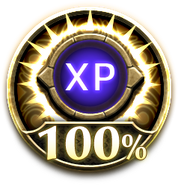 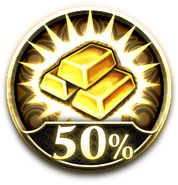 Gold booster
Add a photo to this gallery

The Duel of Champions features over 30 premade decks and packs. Both of these can be bought with gold or seals. The player can sacrifice cards at the infernal pit for gold and wildcards, the latter which can be used to obtain other cards at the Altar of Wishes.

There are seven factions: Haven, Necropolis, Inferno, Stronghold, Sanctuary, Academy, and a Neutral faction. Each has its own unique playstyle.

The neutral faction is unique in that it has no heroes, but its creatures, spells, and fortunes can be used in any library.

Retrieved from "https://mightandmagic.fandom.com/wiki/Might_%26_Magic:_Duel_of_Champions?oldid=144284"
Community content is available under CC-BY-SA unless otherwise noted.