Might and Magic: Heroes Kingdoms
Might & Magic: Clash of Heroes is a puzzle strategy role-playing game originally developed for the Nintendo DS by Capybara Games and published by Ubisoft Entertainment, the sixth handheld game in the Might and Magic franchise. Released for the DS on December 1, 2009, and updated, digitally-downloadable ports for the PlayStation 3, Xbox 360 (stylised as Clash of Heroes: High-Definition) released in Summer 2010.[1] Released to PC on September 22, 2011. Additionally, the game received a release on Facebook in 2012.

Clash of Heroes was met with critical acclaim on release, earning numerous awards (including DS Strategy Game of the Year from IGN and DS Puzzle Game of the Year from Nintendo Power), and was ranked as the fourth-best Nintendo DS game released in 2009 by Metacritic.[1] It is the third standalone game set in the Ubisoft continuity, and serves as a prequel to the events of Heroes of Might and Magic V, taking place 40 years prior to Queen Isabel's War.

The gameplay in Clash of Heroes is akin to its predecessor Critter Crunch, borrowing elements from the Heroes of Might and Magic series. Battles are turn-based, and consist of one-on-one strategic combat. Each turn, players receive a number of moves (generally three) to transport individual troops around the grid in an effort to stack similarly coloured units vertically or horizontally. When the correct number of units of the same colour are stacked vertically, the units enter a charge phase of multiple turns during which they gather Attack Power. When this phase is complete, they execute an attack, vertically traversing the battlefield; enemy units in their path reduce their total Attack Power as the attack proceeds. If the attacking unit has Attack Power remaining upon destroying all defending troops in their path, they strike the enemy hero, subtracting their HP. The goal of a battle is to reduce the enemy hero's HP to zero. As certain heroes sustain or inflict damage, their spell meter fills. When the meter is filled completely, they can launch a hero spell, each of which has an individual effect. Each type of unit possesses unique qualities and abilities, allowing for enhanced strategic depth.

Five factions are present in Clash of Heroes, all of which are based on their incarnations in Heroes V - the Sylvan, Haven, Necropolis, Inferno and Academy. Heroes are limited to commanding units from their own faction, and each faction is attuned to eight available units total. Troops are divided into three levels of potency: Core (three types of unit per faction), Elite (two) and Champion (two). Stacking three Core units of the same colour horizontally creates a defensive wall which diminishes the Attack Power of attacking enemy stacks. Heroes are equipped with an unlimited supply of Core units, whereas Elite and Champion units are limited and, in the story mode, must be recruited from static dwellings. The game's three resources - Gold, Ore and Rubies - are utilised to purchase these high-tier units. In the story mode, heroes (and their affinity with units) are bolstered by experience, allowing them to level up, resulting in statistic bonuses and higher HP.

During the story mode, exploration phases occur on an adventure map populated by pre-placed nodes, allowing the player to interact and battle with NPCs to claim treasure. Random encounters are possible in certain zones, and many battles are stylised with more complex puzzles or objectives: Battle Puzzles require the player to "solve" a battle situation, using a certain number of moves to achieve victory in a specific manner, while bounty hunts require hunting down a particular NPC and defeating them in combat for rewards. The storyline is divided into six chapters, one of which is a prologue. The player controls Anwen, Godric Unicorn, Fiona Unicorn, Aidan Unicorn and Nadia respectively as the story progresses. Aside from the prologue, each chapter concludes with a specialised boss battle, requiring the player to destroy the boss itself rather than units or creatures. Artifacts, which grant bonuses in battle, can also be discovered during exploration and equipped at will. 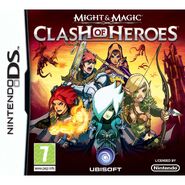 An example of how combat works 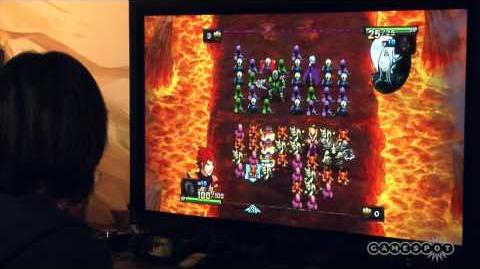 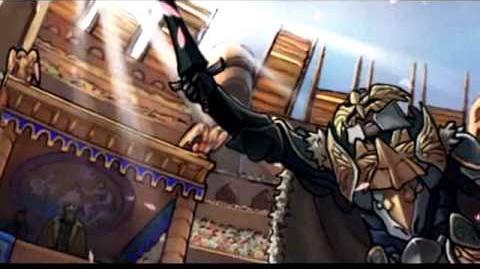 Might And Magic Clash of Heroes Official Trailer (2009, Ubisoft Capy) 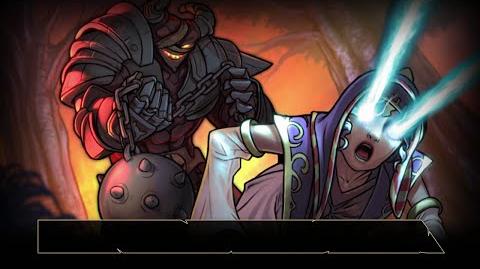