Merikh is a hero in Danse Macabre and in Might & Magic: Heroes VII.

Merikh was once a Mageblade. After a long and dutiful service in the Wizard armies, Merikh became a law enforcer during peace time, tracking criminals and delivering justice. At first, Merikh took pride in his work, but as he grew older his enthusiam started to wane, eventually replaced by a deep depression. There were so many unresolved crimes, so many criminals at large, and so little time... This is how he was seduced by the Spider Cult and its gift of immortality. Unfortunately, becoming Undead also destroyed his regards for life, turning him into a merciless executioner. Merikh quickly rose among the ranks of the Necromancers, soon becoming Belketh's personal agent.OffBck

Once a Sherif of the Seven Cities, Merikh remained a stern agent of the law after being turned into an Undead by Archon Belketh himself. It was Merikh who presided over the trial of the nefarious Nethermancer Sandro, banishing him from the Wizard lands. When Sandro returned, some sixty years later, he had not forgotten Merikh's role in his exile, and perpetrated his revenge by trapping his soul within a ghoul's body. It took Belketh several years and a great amount of power to track down the creature and salvage Merikh's essence, binding it to a more appropriate vessel: a black suit of armour. Relentless, unbendable and incorruptible, Merikh has become a terrifying embodiment of Justice.OffBck

Merikh is an Ebon Knight.

Merikh is an Ebon Knight.

Merikh appears in Danse Macabre and in Might & Magic: Heroes VII. 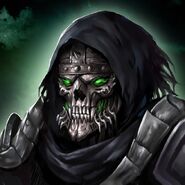 Merikh's prerelease portrait in Heroes VII
Add a photo to this gallery
Retrieved from "https://mightandmagic.fandom.com/wiki/Merikh?oldid=150708"
Community content is available under CC-BY-SA unless otherwise noted.