watch 03:41
Wiki Targeted (Games)
Do you like this video?
Play Sound

Lord of the Clans
Clanlord of the Nightshard clan

Menan is a character in Might & Magic: Heroes VI add-on, Shades of Darkness.

Younger brother of Raelag and twin of Sylsai, Menan dreams of returning his people to the surface and making peace with the Sylvan Elves, even if it means accepting to serve the High King of the Elves. While aware of its flaws, Menan accepts the Triumvirate system that ensures the three royal clans make decisions together. A natural diplomat, and often accused of being too soft, he disapproves of the path Sylsai is taking the Soulscar. He secretly waits for the day Raelag will accept the burden of the crown and unify the various clans as one. Menan definitely knows it is impossible for the Dark Elves to turn away from Malassa, but truly hopes they might return to the Forests of Irollan he knew in his youth.OffBck

Menan is clanlord of the Nightshard clan. Unlike Sylsai, Menan tracks the path of reason and knowledge and will try to protect the Dark Elves than leading them to war.

Menan inherited the title of Lord of the Clans when his predecessor mysteriously disappeared. Under his leadership, Ygg-Chall has been at peace, and the balance between the various clans has been maintained. Menan dreams of returning his people on the surface, and someday make peace with the Sylvan Elves. He definitely knows it is impossible for the Dark Elves to turn away from Malassa, but truly hopes they might return to the Forests of Irollan he knew as a small child.
After decades of peace, a sudden melancholy took hold of Menan's heart. This depression drove him to despair and, eventually, suicide. Some claim this was the result of being poisoned with a Banshee's Tear. The truth was lost in the gruesome civil war that followed his death, that would see the warmongering Soulscar clan rise to prominence in Ygg-Chall.
OffBck

After years of peace during Menan's rule, Vayaron decided to finish it by killing him. He persuaded Sorshan to poison Menan by Banshee's Tear. Affected by madness and melancholy, Menan could not bear to live. He killed himself by stabbing in the throat.

Menan is a Sorcerer.

Menan is a Shade Weaver. 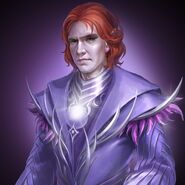 Menan, in Heroes VI
Add a photo to this gallery
Retrieved from "https://mightandmagic.fandom.com/wiki/Menan?oldid=160007"
Community content is available under CC-BY-SA unless otherwise noted.