For other uses, see megadragon.

The mega dragon is a unique creature in Might and Magic II: Gates to Another World, and a central part of the history of CRON.

The mega dragon, should it fight the player's party, is practically impossible to defeat: it has an incredible amount of hit points, it can only be harmed by non-elemental magic which fails against it about half the time, and its melee attack eradicates party members thus removing them from the battle for good. It can also knock out all party members in the front row (or up to six targets, in versions of the game that don't use rows) with its energy breath attack, though this can be recovered from.

The only ways of dealing significant damage to the dragon are the Mass Distortion spell, and Implosion (once the dragon's HP has fallen to 2000 or less, thus making Implosion more powerful than Mass Distortion). Even if the player had a full party of clerics with Photon Blades, though, it is very likely that they would not have enough turns to defeat the dragon.

The mega dragon was created in the eighth century to battle King Kalohn. Both itself and Kalohn perished in a battle in the area that thus become the Quagmire of Doom. The player's party are ultimately obliged to save the king by traveling back to the eighth century with the elemental orb and talons that will allow Kalohn to defeat and survive against the dragon.

If the player's party returns to the Quagmire of Doom in the eighth century without the orb and talons, they will witness Kalohn die before the mega dragon turns to fight them. 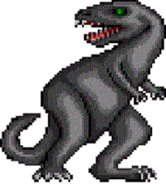 Genesis/Mega Drive sprite.
Add a photo to this gallery
Retrieved from "https://mightandmagic.fandom.com/wiki/Mega_dragon_(MM2)?oldid=157623"
Community content is available under CC-BY-SA unless otherwise noted.