This article is about the creature from Heroes of Might and Magic III. For other uses, see medusa.

The medusa is the fourth-tier creature of the Dungeon faction in Heroes of Might and Magic III. It can be recruited from the chapel of stilled voices. The medusa can be upgraded to the medusa queen.

Armed with bows, medusas and medusa queens can attack at range to good effect. Their hand-to-hand attacks do the same damage and also have a 20% chance of petrifying their targets for three rounds. Petrified creatures cannot move, take 50% damage, and become unfrozen when attacked.OffBck

Like the beholder, the medusa can provide ranged support for the Dungeon army. The medusa has No melee penalty, and a Stone gaze that has a 20% chance of petrifying targets for three rounds. 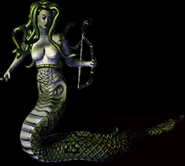