Masfar is a hero in Might & Magic: Heroes VII.

One of the pillars of the young House Materia, Masfar of Al-Imral has been studying the Shantiri constructs for as long as he can remember. His research led to significant breakthroughs to recreate the greatest achievements of the forgotten civilization, the Titans. While Masfar spends most of his time exploring the lands of Ashan unearthing ancient knowledge, he always comes home to the one thing he loves more than anything: his daughter, Jadwa.OffBck

Before Masfar became known as the father of golems, he worked at a Seven Cities outpost near Broken Spear Pass along with his assistant Gloria. When Tomas Wolf found evidence of demonic activity, Gloria left with him and Masfar stayed behind to protect the pass. When she revealed herself to be a demon and returned with a hostile army, Masfar fulfilled his duty and defeated her.

Later in life, he was emotionally broken after the untimely death of his daughter Jadwa. Attempting to recreate her (thus resulting in the feminine shape of gargoyles), he lacked the spark of his daughter's essence. He strong-armed the necromancer Lyla into recovering her soul with the Flower of Dolor, despite her warnings that Jadwa might return changed. Indeed, Jadwa's broken spirit was enraged, trying to kill her father with ancient Shantiri golems and titans. When Masfar pleaded with his daughter that he could not live without her, she embraced him and thrust their bodies into the nearby volcano, ending both their lives.

Masfar appears as a hero card. He is the leader of the Academy faction.

Masfar's artwork in Duel of Champions 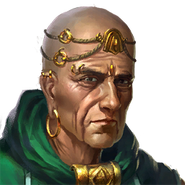 Aged Masfar's portrait
Add a photo to this gallery
Retrieved from "https://mightandmagic.fandom.com/wiki/Masfar?oldid=149607"
Community content is available under CC-BY-SA unless otherwise noted.