Undead (as of Heroes VI)

For other characters of the same name, see Luna.

Luna was born in the forests of Irollan during a full moon, and it is said that the baby seemed to stare at the moon with her eyes wide open, prompting her parents to name her in honor of the celestial body. Some say her unusual destiny was written that night because of her very name. Naturally attuned to the mystical forces inhabiting the world, Luna was trained to become a Druid, but the young Elf could not find Harmony; to the other Druids, she seemed restless, unpredictable, unreliable. She finally found peace in the most unexpected way: by drinking the venom of the Mother Namtaru and embracing Undeath. Reborn as a Vampire, Luna is definitely a defender of Harmony - though her understanding of the term is very different from what she was taught as a Druid. For Luna, Harmony comes from the silence of Death.OffBck

Luna can be found on a clearing (41,40) in the Halloth Grove forest, she is a mysterious pale elf.

Luna is a Magic member of the Necropolis faction. As such, her default class is Necromancer. While her Dynasty character is listed as an Embalmer, she may be developed however the player chooses when used in a game.

She can train party members to become grandmasters of Dark Magic for a price (1 point of Vitality from each party member).

Luna is an Archon. 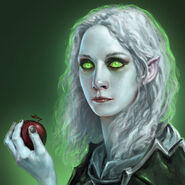 Luna in Heroes VI
Add a photo to this gallery
Retrieved from "https://mightandmagic.fandom.com/wiki/Luna_(Ashan)?oldid=150707"
Community content is available under CC-BY-SA unless otherwise noted.