Lucretia is a hero appearing in Heroes of Might and Magic V, Danse Macabre expansion of Heroes VI, as well as Might & Magic: Heroes VII. She is best known as a follower of Nethermancer Sandro.

First Child of a minor Court of the Bull Duchy, the beautiful and ambitious Lucretia dela Segadora gained both influence and power at the Duke’s court. The nature of her relationship with the Duke was the topic of much speculation and gossip and irked many, including the Duke’s heir, Ovidio. True or not, these rumours proved her undoing: when the old Duke was killed, she was one of the prime suspects and Ovidio was quick to remove her from the court. Lucretia was stripped of her rank as Countess in favour of her younger brother Giovanni, leaving the young woman embittered but powerless. This is when a mysterious Necromancer named Sandro made her an offer she couldn’t refuse.OffBck

Lucretia, countess, stripped of her title, asks Sandro to help her. She must punish her brother Giovanni for his intrigues against her. Sandro agrees, but asks Lucretia to escort him to duke Ovidio's reliquary. Finally, when Ovidio was killed, Sandro and Lucretia escape from the Holy Falcon Empire. Lucretia decides to join to Sandro and become his disciple. She travels with necromancer and helps him to find powerful artefact. Then, while Sandro traveled in the Void, Belketh came to Lucretia, told that Sandro used her and mortally wounded Lucretia. Sandro defeats Belketh and offers Lucretia to become a necromancer. Lucretia admits that Sandro is the most magnificent person and agrees to take his offer, despite knowing the truth. She becomes a vampire and immortal Sandro's follower.

Seduced and turned into a Vampire by Sandro himself, this ex-Bull Duchy countess immediately showed thirsts for both blood and power. Already a talented courtesan when still alive, Lucretia's vampiric embrace granted her a couple of centuries to hone her natural gifts for seducing, backstabbing, and politicking. She has recently returned to Heresh, although it is not clear if she still serves her old master.OffBck

Seduced and turned to the Necromancer ideals by Sandro himself, this ex-Bull Duchy countess immediately showed thirsts for both blood and power. Already a talented courtesan when still alive, Lucretia's vampiric embrace granted her a couple of centuries to hone her natural gifts for seducing, backstabbing, and politicking. Promoted to the rank of Undead Princess, she is a spiritual and (im)moral leader to other vampires that dream of re-creating her escapades.OffBck

Lucretia is a Necromancer.

Lucretia is a Confessor.

Lucretia is a Bone Guard. 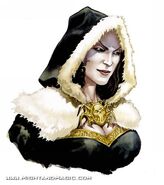 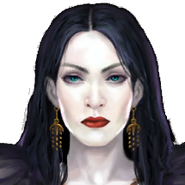