Once kennel master to Emperor Connor himself, Lorhish now plies his trade in the heart of Sheogh running a Cerberus kennel. A man of principle, this transformation in allegiance, if not vocation, came about when Lorhish refused a direct order from his Emperor to hunt down some young Orcs who were stealing apples from his orchards. Dismissed from his post and facing grim prospects, Lorhish hit the ale hard until a mysterious beauty promised him a new life for a few details about an Imperial Hunt scheduled for the end of the month on a visit to the Greyhound Duchy. Lorhish accepted her offer, and the result was an attack on the hunting party that left half of the Imperial Court dead. Tortured for his involvement in the plot, Lorhish died from his wounds, but never revealed the identity of the woman – a fact that seemed to account for his resurrection under her command in Sheogh.OffBck

Lorhish is a Demon who tames hounds. Wherever Lorhish goes, he is always accompanied by those savage beasts.

During the reign of Emperor LiamEdit

Lorhish was a demon who was tending to his "pets". He told Kiril that he will give the hell hounds if he has them in his army. Whether Kiril brought the dogs or defeated Lorhish is unknown.

Later, Lorhish dated Jezebeth, but soon she knocked him out. He was working as a barkeeper in Sheogh. Lorhish battled Aidan, resulting in Aidan hurting his most favourite hell hound to get the location of Azexes. 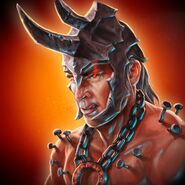 Lorhish, in Heroes VI
Add a photo to this gallery
Retrieved from "https://mightandmagic.fandom.com/wiki/Lorhish?oldid=124606"
Community content is available under CC-BY-SA unless otherwise noted.