Liam Falcon, the Holy Emperor, publicly pledges himself to the glory of Elrath, the Dragon of Light, but in truth, what Liam seeks most is a place in history. Unable to sire his own heirs despite two successive marriages, the throne is likely to pass to his young niece Gwendolyn upon his death. This needles Liam greatly.
To compensate for his lack of success in the royal chambers he seeks victories on the battlefield instead. A war with the Elves of Tuidhana, and a campaign to rid his Empire of Orcs is the result.
Ambitious, vain and bitter, Liam Falcon is a great danger not only to the Holy Empire, but also to Ashan itself.OffBck

Emperor Liam Falcon was the ruler of the Holy Falcon Empire. Being usually advised by Uriel, Liam was known to make choices that some people of the Empire did not approve. However, sometimes he needed to personally attend to a matter requiring solving. He died in 564 YSD, killed in besieged city of Falcon's Reach by demon prince Ahribban.

With Liam's latter concubine having been unable to conceive after the War of the Bitter Ashes left her emotionally unbalanced, the Imperial Council had to appoint Gwendolyn, his niece, to the title after Liam's untimely death.

Liam is an Vindicator. 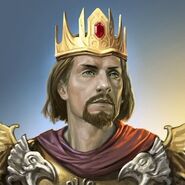 Liam's statue in Cassandra's imperial devotion in Duel of Champions
Add a photo to this gallery
Retrieved from "https://mightandmagic.fandom.com/wiki/Liam?oldid=148756"
Community content is available under CC-BY-SA unless otherwise noted.