Warchief of the Whitespear Clan from Redskull Island, Kraal proudly traces his lineage back to the first Orc tribes who rebelled against their Wizard creators and have wandered Ashan, rootless, ever since.
A wily, tenacious leader, Kraal is unshakable in his belief that, as Father Sky has decreed, his clan is entitled to the harsh, mountainous lands where they currently reside – lands that form part of the Griffin Duchy.
Slava, the Duke of Griffin, considers him as his friend, and asked him to become the master-of-arms of his five children.
Caught in the middle of bitter enmities that exist between House Griffin and House Wolf, Kraal has become a skilled player in diplomacy, but hides this well by playing up to Orc stereotypes of limited intelligence, hot-headedness, and violent tendencies.
Dice and other games of chance are his only indulgence.OffBck

Kraal was born on Red Skull Island (part of Pao Islands) where he lived most of his life. When Toghrul decided to join the Demons, he was detached to fight them in Holy Falcon Empire. There he joined a human hero named Slava Griffin.

Kraal is the mighty Orc Chieftain of the Whitespear Clan, Sandor and he came to the peninsula to attend a wedding. He can be found in the tribal house (43,15) in the Desolate Wilds.

Kraal is mostly seen as talkative character, but it is revealed in Towards the Within scenario that he is a Barbarian.

He is willing to promote a Berzerker to Warmonger. Only a brave and fearless warrior can beat the Kai Pao and bring glory to himself.
(Quest) 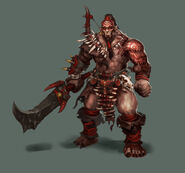 Add a photo to this gallery
Retrieved from "https://mightandmagic.fandom.com/wiki/Kraal_(H6)?oldid=156877"
Community content is available under CC-BY-SA unless otherwise noted.