Deceased (as of the Reckoning)

"Thousands would've starved to death. Thousands more would've certainly succumbed to disease, but instead of disbanding his army Kilgor started a war - a war that brought about the end of the world!"
—Waerjak [src]

King Kilgor (Heroes III: Armageddon's Blade official bio) is the protagonist of the Festival of Life campaign in Heroes of Might and Magic III: Armageddon's Blade. A Barbarian native to Krewlod, Kilgor rose through the ranks and wrested the throne from Duke Winston Boragus following the Restoration Wars. Highly ambitious and power-hungry, Kilgor obtained the legendary Sword of Frost and attempted to wage war on all Antagarich itself, but was opposed by the Forest Guard. His final clash with Gelu resulted in the Reckoning, which destroyed the world of Enroth.

"In the Festival of Life, those who fail, either die at the hands of their enemies, or by their own hand after capture. I will be merciful toward my opponents. I will take no prisoners."
—Kilgor [src]

Born during the 1150s AS, Kilgor was the son of a Krewlish clan leader, fighting alongside his father in internal clan wars from an early age, felling Behemoths and rivals alike. In spite of his lineage, Kilgor did not enjoy a youth of comfort, instead being initiated in warfare by his clan's military tutors. He successfully challenged and killed his father for leadership of the clan on his 18th birthday: some claimed that Kilgor's father died with a smile on his face, arguing "why wouldn't a father be proud of his son's accomplishments?"[1]

Kilgor's fame subsequently catapulted throughout Krewlod, leaving many to consider him the only man capable of winning the Festival of Life: he was aware that he would come of age during the Festival, and all his exploits to date had been geared towards a rise to power.[2] Chaotic, violent, unilaterally victorious and frequently described as "insane", Kilgor reportedly derived a sadistic pleasure from battle: his tactics were renowned as "reckless" and "brilliant". Survivors would tell of the wild pleasure he displayed for the bloodlust of conflict, and spoke of "uncontrollable giggles of glee accompanying his berserker's rage".[1]

During the Festival, his weapon of choice was a large two-handed spiked mace - he argued that "you can't hear bones break under a blade".[1] In the first of his trials against the elders of Krewlod during the Festival, Kilgor put his mace to the test, pitted against the Ancient Behemoth Razor Claw. Relishing the encounter, Kilgor slew the Behemoth and his entire family, explaining that slaying them would teach him how to properly subdue them in his ascent.[3]

"The last Barbarian King marched against the rest of the world as much for economic reasons as for his own megalomania. The Barbarian land of Krewlod had been on the verge of its greatest famine, and too many herds had been consumed by Kilgor's vast horde. Too many farms had been burned during Kilgor's campaign to become King."
—Waerjak [src]

Taking command of three assigned lieutenants - Gird, Gurnisson and Oris - Kilgor quickly proved his competence as a leader, clearing a section of Krewlod's abandoned wildlands of all indigenous creatures and monsters without difficulty: "neither man or beast" stood in his way.[4] Following this victory, he engaged in a final clan war to eliminate his three rivals - Telez, Degab and Vilmit. Crushing his opposition and ravaging the countryside, Kilgor overcame all three clans, earning the chance to battle Duke Boragus himself. He took no prisoners during his conquest, declaring that those who fell would ordinarily die regardless - whether captured or otherwise.[5]

Unmoved by the respect Boragus widely commanded throughout Antagarich, Kilgor denounced the King's accomplishments as "unimpressive", blithely asserting that "if he is to earn my respect, he will do so only when he stands over my grave". Showing the depths of his determination and skill, Kilgor rebuked Boragus' threats and tackled his final test, leading armies against the Duke. Brutally overcoming his last obstacle, Kilgor outwitted and slew Boragus, whose bloodied, decapitated head was displayed in Krewlod's throne room as testament to Kilgor's disposition. Now crowned, the new King concluded his campaign by affirming "I have bathed in the blood of my enemies and sit upon the throne of Krewlod. My reign begins now. I am king."[6]

The Pride of Two Leaders[]

"The example I set for my people when I was the brutal Barbarian Tyrant has come to its final fruition today. A man named Kilgor now rules my people, and he's turned them into the blood thirstiest bunch of savages in all the land."
—Tarnum [src]

As King, Kilgor grew decadent and took several wives - including Kija, his third wife, and Yutena, whom he favoured with daily sparring - and dominated "all who came before him".[7] Shortly after Gelu departed Antagarich to seek out and destroy the Sword of Frost in Vori, Kilgor permitted Kija to pursue him and return with the weapon to aid in his conquests.[8] Outmatching Gelu and Tarnum, Kija was successful, and bestowed her husband the Sword.[9] By this time, with Kilgor having reportedly burned an abundance of farms in his ascent to power, Krewlod was plunged into its greatest state of famine in history.[10]

Kilgor chose to lead his army to war against the Forest Guard and Gelu, who was determined to destroy the Sword of Frost.[10] Despite prior warnings from Tarnum, Gelu carried Armageddon's Blade into battle with the Barbarian King, and faced his foe in one-on-one combat. They dodged each other's strikes for several moments, but came to a stalemate: Kilgor and Gelu locked arms, clashing Armageddon's Blade and the Sword of Frost together. As predicted, the convergence of the two blades triggered the Reckoning, which killed both leaders and rendered Enroth uninhabitable.[7]

Perceived as having been responsible for causing the Reckoning and devastating his own people, the now-deceased Kilgor was reviled on Axeoth, and his name was frequently uttered with contempt by the new leaders, including Emilia Nighthaven, Waerjak, Gauldoth Half-Dead and Tarnum. The people of Kilmar voiced especial disdain for their former ruler. By many, he was considered a "mad king" who had led the Barbarian culture, and the world of Enroth, to its ruination.[11][12][13]

"The nature of the Universe is indiscriminate. It doesn't judge. It doesn't care about good or evil because neither exists. Take the Reckoning - the greatest example of a destructive force that I can think of. I can argue that it probably did as much good as evil. For one, the Reckoning claimed the life of that Barbarian scum, Kilgor."
—Gauldoth Half-Dead [src]

Kilgor is a Barbarian. He starts with advanced Offense.

As a campaign-only hero, Kilgor is present in the four scenarios of Festival of Life in Heroes of Might and Magic III: Armageddon's Blade. He appears as the main playable hero in Razor Claw, Taming of the wild, Clan War and For the Throne, and losing him in battle entails losing the game.[3][4][5][6] 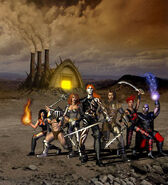 An early version of Kilgor depicted with the protagonists of Heroes III: Armageddon's Blade

Kilgor with the protagonists of Heroes III: Armageddon's Blade

Kilgor as portrayed in Heroes IV

Kilgor as portrayed in Heroes IV