Alive (as of Dark Messiah)

"This is only a battle. The war will still be mine."
[src]

Kha-Beleth (also known as the Demon Sovereign) is the main antagonist of Heroes of Might and Magic V and the undisputed leader of the Demon race in Ashan, who has ruled the jailworld of Sheogh since the disappearance of the Six Demon Overlords in 564 YSD. Enigmatic in his ways yet ineffably evil, his ambition to secure victory in the name of Urgash and resultant schemes define the events of Heroes V and, later, Dark Messiah of Might and Magic.

Kha-Beleth is an Arch-Demon with no master, and no past. Nobody knows from whence he came.
Unlike other demons who constantly feed on scraps from their overlords, Kha-Beleth relies fully on his own resources, a trait which proves him a powerful figure in the complicated world of infernal politics.
He makes no secret of what he wants: nothing less than destruction of the walls of Sheogh, and freedom for the children of Urgash.
With his near-infinite patience, his fearlessness, his brilliant mind, and his charismatic manner, he may one day realise his lofty goals.OffBck

Kha-Beleth rose to power shortly after the disappearance of the Six Demon Overlords; it is uncertain whether or not he played a part in their vanishing. In his early years at the helm of Sheogh, he began to preach "another possibility for demonic organisation, [speaking] of a world where all Demons are created equal and have a right to live freely within and without Sheogh." He fought for the freedom of his people, but power twisted him.[1] Gathering followers, he intended to use an impending Bloodmoon Eclipse to "gain a foothold on Ashan, and expose, if not impose, his people’s right to an equal place amongst the children of the Dragon Gods".

Now almost all of Sheogh is under his control, to the people of Ashan, they have to assume that Kha-Beleth is no ordinary Demon, and accept the fact that he has somehow managed to bring some form of Order to Chaos. Many Scholars and Wizards have many theories, more or less far-fetched, about who or what the Demon Sovereign could be. Kha-Beleth is never seen without his armour, so they don’t even know what he truly looks like. What they do know for sure is that: his power is fearsome, he has near-infinite patience, he’s incredibly cunning, a skillful mastermind, a feared manipulator and it’s without a doubt not the last Ashan has see of him.

The Second Eclipse and Shades of Darkness Edit

During the Second Eclipse, as the other Demon Princes attacked the nations of Ashan and met their end, Kiril Griffin arrived to Sheogh, as he was tricked by the Angel, Sarah, he sent the succubus' Xana and Daeva to help him in his tasks. He soon taught Kiril the defining traits about the Demons, instructed him on gaining allies, and warned him to keep the soul of the Demon Prince within him in check as the Demon Sovereign himself couldn't remove it. After Kiril dealt with Sarah and brought the Faceless' Invisible Library to Sheogh and became it's warden, Kiril began to serve Kha-Beleth in his plans.

Those plans came to fruition years later after Raelag, the Dark Elf Clan lord, defeated Kiril and took the Invisible Library, using a Tear of Asha, to the new Dark Elf realm of Ygg-Chall and made it their capitol, Konos. In truth Kiril was the last entity in Sheogh who resisted his rule, doing a great service to Kha-Beleth. Now confident that the Demon Sovereign had gained a new servant for his future plans, all he had to do was to keep watch and bide his time for when Raelag will be useful.

By the Third and Fourth Eclipses, the Demons were all fighting in the name of Kha-Beleth, one single ruler to whom they showed an almost zealous loyalty. Using his power, shear will and charismatic abilities, the Demons are becoming more disciplined, and that’s a worrying thought for the denizen's of Ashan, allowing his armies to conquer his foes more effectively. Even the most powerful warriors of the infernal armies, known as Arch-Demons are under his control. Once the Overlords’ honor guard, they are now Kha-Beleth’s lieutenants, ready to commit any atrocity to gain his favor. Though the demons were constantly pushed back thanks to the alliances made between the kingdoms of Ashan against him, the devastation made was considered worse than previous Bloodmoon Eclipses.

The Fifth Eclipse actually became somewhat of a pyrrhic victory for Kha-Beleth and his demons. Although his infernal armies were routed on the battlefield, Kha-Beleth used the pride of Maeve Falcon, Empress of the Holy Falcon Empire, and had the traitor turned Succubus, Jezebeth to infiltrate the Imperial Capitol, Falcon's Reach to achieve victory. Jezebeth indeed succeeded in her mission by murdering Meave and supposedly her children and making sure she succeeded, Kha-Beleth ordered her to burn the capitol to the ground to make sure no heir of Falcon survived. However, Jezebeth failed to kill the last Falcon, Brendan, who was soon taken in by the Dragon Knights, much the Demon Sovereign's anger and made sure Jezebeth was punished severely for her failure after Ivan, Duke of the Griffin Duchy, killed her, sending her back to Sheogh. This setback however, allowed the empire to fall into a terrible civil war over who will succeed the late empress. The Fifth Eclipse would then be known as the Demon Sovereign's defeat but also his greatest victory against the Holy Falcon Empire.

Despite these accomplishments, Kha-Beleth hasn't yet achieved his desire to conquer the lands of Ashan, due to the sheer resilience, courage and determination of the Elder Races, namely the Knights of the Holy Empire. Yet despite these setbacks, The Demon Sovereign hasn't given up and with all of his infernal abilities, leadership and patience he may one day achieve his goals.

Kha-Beleth sought allies in Ashan to further aid his plans and fortune came in the form of the broken Dark Elves fighting a civil war after the assassination of Clanlord Menan. While the Dark Elves have disappointed him before, their fractured state made them perfect candidates for allies. Sending his envoy, Lord Agrael, to meet with Sylsai, they planned to sow discord in Grimheim and bring an army of his Demons into Ashan.

Despite some resistance led by rebels Vilma and Kari (guided by mysterious visions), the Dark Elves and Agrael had succeeded in retrieving the runic key to a massive gate to Sheogh itself by killing the King Under the Mountains, Hathor. With the king dead, the dwarf clans were confused and leaderless, allowing the Dark Elves to prepare for Kha-Beleth and his armies' arrival.

Ultimately, the plan failed as the Dwarves rallied under Vilma, an fire giant ascended Kari and the warrior Tolghar. With the combined might of the Dwarves, they were able to defeat the Dark Elves after casting Sylsai into the inferno, killing him. Though Kha-Beleth's envoy had escaped the battle, the Demon Sovereign's plan to enter Ashan and launch a surprise attack on the surface kingdoms ended in failure. Angered and disappointed, Kha-Beleth now has no choice but to once again patiently bide his time for another opportunity to conquer the lands of Ashan.

Due to his position as the Demon Sovereign, he was the commander of the demon forces during Queen Isabel's War. His top goal in this war was to impregnate Isabel Greyhound with the Dark Messiah. During the first stage of the war, he launched a raid-force consisted of Arch Devils to Talonguard, which interupted the wedding of Nicolai Griffin and Isabel Greyhound. Nicolai, fearing the safety of Isabel, told his uncle Godric to escort Isabel to the Summer Palace, while he battled the demons. Afterwards, Kha-Beleth launched a full-scale attack on the Holy Griffin Empire, which forced Nicolai to defend his empire. This was the perfect diversion for the Demon Sovereign to capture Isabel.

The Demon Sovereign tasked his agent, Agrael, whom had spied on her during her lifetime, to capture Isabel. Agrael then had his minion Biara kill Abess Beatrice and disguise herself like her. Biara, as Beatrice, persuaded Isabel to send Godric and herself to seek aid from the mages and the elves, while Isabel gathered the militia. Later, Biara as Beatrice returned to Isabel and told her that the elves would meet her. When Isabel arrived at the meeting-place, the Demon Lord Agrael ambushed and captured her. Agrael however, was in fact in love with Isabel, and offered her aid in escaping, but Isabel didn't trust the him and refused. Biara, whoes loyalty liad whith the Demon Sovereign, had overheard the conversation. Agrael then moved Isabel to Dunmoor and prepared her to transport to Sheogh, but she was freed by Godric.

After Agrael's failure, Kha-Beleth has learned of Agrael's intensions to kill him, thus becoming the new Demon Sovereign, and the fourth demon ruler through Biara. He sent the Demon Lord Erasial to kill Agrael and steal the Heart of the Griffin, an artifact capable of banishing demons to Sheogh. However, Agrael managed to capture Erasial, and intimdated him. Erasial gave the information to Agrael about the Heart, just before Kha-Beleth killed Erasial. As Biara got info from Agrael, Kha-Beleth then sent Veyer to capture the Heart of the Griffin, but Agrael managed to steal the artifact before Veyer, and banished Veyer back to Sheogh using the artifact.

Kha-Beleth learned that Isabel is going to Hall of Heroes to revive Nicolai, so he sent Veyer to take her. However, he did not plan that the Dark Elves, under Raelag's leadership, would foil his plans. He sent Biara to get the Heart of the Griffin from Tieru, to which she succeded. Finally, Biara, disguised as Shadya, took Isabel so she could give birth to the Demon Messiah. However, Raelag, Godric, Findan and Zehir defeated Kha-Beleth, rescued Isabel and initiated the Rite of True nature on her.

Kha-Beleth is a Demon Lord. 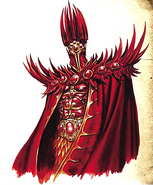 Retrieved from "https://mightandmagic.fandom.com/wiki/Kha-Beleth?oldid=152333"
Community content is available under CC-BY-SA unless otherwise noted.