The keymaster's tent is an adventure map structure in the Heroes of Might and Magic series. First appearing in Heroes III, it replaced the traveller's tent from Heroes of Might and Magic II: The Price of Loyalty. The biggest difference is that the player doesn't have to remember passwords from the keymaster's tent. It also appears in Heroes IV and Heroes V.

After a hero visits the tent, all of the player's heroes will be able to go through the border gates and border guards of the corresponding color.

The border gate is similar to the barrier from the Price of Loyalty. Once it is opened, any hero can pass through, regardless of whether they've visited a tent or not.

Unlike border guards, border gates won't disappear after a hero travels through them. Instead, they'll remain impassable for any player that lacks the password. 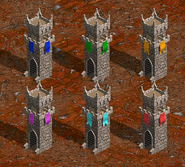