Kaspar was a great doctor and healer who was able to cure even the most terrible wounds. Delving deeper and deeper into the secrets of life and death, Kaspar made a particularly risky experiment that went wrong... and brought him to the realm of the dead. Though he now leads an undead army, his knowledge of anatomy and the treating of wounds remains unparalleled.OffBck

Kaspar was a Wizard of Seven Cities who studied magic in Shahibdiya. However he went on a quest for learning new ways to heal. Being a Wizard, he knows much of the Ashan history. His travels made him come to the Heresh, to mistress Miranda.

Kaspar was born to family of potion makers in the Wolf Duchy, and though a lover of his parents' craft, he aspired to even greater knowledge. This pursuit lead him to the Seven Cities where the Wizards took him under their educative wing.
Kaspar was a brilliant student and his talent remarked, but after participating in an unsuccessful experiment to create a construct with a sacrified essence of a Djinn and a pile of Shadowsteel, a part of him started to question the ethics of Wizards.
Kaspar left on a quest to discover and catalog herbs and plants all over the lands of Ashan, and after decades of contemplation and research heard talk of a new magical philosophy that respected the sacred. Kaspar decided to go to the Seventh City, Al-Betyl, and investigate this new cult dedicated to Spider Goddess.OffBck

Kaspar is a Healer formerly serving Hierophant Anastasya. He can be found in his hospice (9,19) in the Karthal slums.

Despite his ghoulish appearance -- his face was scarred by a failed experiment involving Void Magic -- Kaspar is nonetheless one of Ashan's greatest healers. Born to family of potion makers in the Wolf Duchy, he aspired to even greater knowledge. This pursuit lead him to the Seven Cities where the Wizards took him under their educative wing. Kaspar was a brilliant student and his talent remarked, but eventually began to question the ethics of the Wizards. This led Kaspar to join the ranks of the Spider Cult, a new magical philosophy that respected the sacred, and ultimately to become a Lich himself.OffBck

Kaspar appears in Heroes V as a Necromancer.

Kaspar is in Heroes VI as an Embalmer.

Kaspar is also a master skill Primordial Magic user willing to teach anyone adept for 1500 Gold. He will accompany the party, if his help is needed, as hireling he will heal ailments for 15 Gold.

After finishing the quest, he can be hired from both locations in Karthal slums and from the Fort in the Crag.

Kaspar is a Death Knight in Heroes VII. 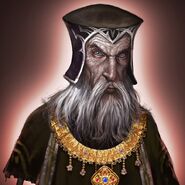 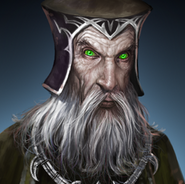 Kaspar as a member of the Shadow Council 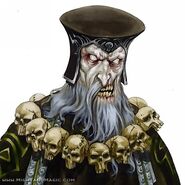 Add a photo to this gallery
Retrieved from "https://mightandmagic.fandom.com/wiki/Kaspar_(Ashan)?oldid=150704"
Community content is available under CC-BY-SA unless otherwise noted.