Kalohn as a young man

King Kalohn is a character in Might and Magic II: Gates to Another World. He is the King of CRON.

Kalohn was initially weak in magic, but very courageous. When the elemental lords ruled CRON, a group of humanoid spellcasters gathered on the Isle of the Ancients to create an orb of power that could control or destroy any elemental creature. The orb had four talons, each of which had power over one of the elements. The orb was too powerful to be controlled, killing or mutilating anyone that tried, but in the late 700s, Kalohn managed to use it while remaining unharmed.

Kalohn went to the highest mountain in CRON, challenging the four elemental lords to battle. Kalohn emerged victorious and imprisoned the four elemental tribes in the four corners of CRON, creating barriers to keep them imprisoned. Each of the four talons was placed in its respective prison. Kalohn had gained great magical power from the battle and his use of the orb.

The mortals of CRON prospered, and Kalohn became King Kalohn the Conjurer, ruling them for thirty years or more. But Acwalandar the Water Lord studied magic in his prison, and in the mid-800s, he created the first dragon (the mega dragon) and released it on CRON. King Kalohn faced the mega dragon on the Savannah of Plenty, but the orb was weakened without the talons, and the king and the dragon slew each other. The Savannah was transformed into the Quagmire of Doom, and Lamanda, the king's daughter, took control of CRON.

Years later, Lamanda asked the VARN adventurers to use Lord Peabody's time machine to travel back in time and save her father's life. The group retrieved the four talons and gave them to the king, who defeated the mega dragon. When they returned to their own time, Kalohn was sitting on CRON's throne.

As thanks for their help, Kalohn gave them a vital password that they had to use in their quest to stop Sheltem from destroying CRON.

The party encounter Kalohn by using the time machine to return to the ninth century. They must give him the air talon, fire talon, earth talon, and water talon to help him defeat the mega dragon. They can then return to their own time to receive the password. 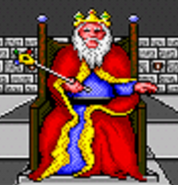 Kalohn as an old man.
Add a photo to this gallery

King Kalohn appears only in Might and Magic II: Gates to Another World.

Retrieved from "https://mightandmagic.fandom.com/wiki/Kalohn?oldid=148690"
Community content is available under CC-BY-SA unless otherwise noted.