Jon Van Caneghem is a video game designer, programmer and producer, and the creator of the Might and Magic series. Van Caneghem founded New World Computing in 1984 with his wife, Michaela Van Caneghem, and soon released Might and Magic Book One: The Secret of the Inner Sanctum. Van Caneghem went on to spearhead and co-create the next successive seven installments in the series.

Van Caneghem designed King's Bounty, which was released in 1990 and spawned sequels along with the Heroes of Might and Magic series; he also actively participated in the direction and creation of content for the first four Heroes installments. Ubisoft Entertainment reportedly offered him a position on the Heroes of Might and Magic V design team, which he ultimately declined.[1] He was inducted into Computer Gaming World's Hall of Fame in 2005.[2]

After The 3DO Company's bankruptcy, Van Caneghem joined NCSoft in 2004 (alongside his friend, Ultima creator Richard Garriott), but left a year later.[3] In 2006, he co-founded Trion World Network alongside Lars Buttler, where he worked on Heroes of Telara.[4] Van Caneghem has since left Trion World Network, and as of 2009 was reportedly part of Electronic Arts' design team working on Command & Conquer 4: Tiberian Twilight, though has not been credited in the finished game.[5] He was also the general manager of Victory Games between 2010 and 2013 and led the development of the subsequently cancelled Command & Conquer (2013). In 2014, Jon Van Caneghem founded VC Mobile Entertainment, also in Los Angeles, and unveiled its first title, Creature Quest, in January 2016. 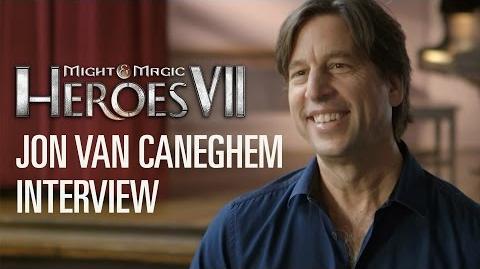 Might & Magic Heroes VII - The Man Behind Heroes - Extended UK