Jezebeth is a hero in Heroes of Might and Magic V and a character in Might & Magic: Clash of Heroes.

As a Demon cultist masquerading as a Knight of the Empire, Jezebeth spends her days impersonating pompous sycophants and her nights worshipping Urgash, the Dragon of Chaos. The dual nature of her life places her under terrible strain, and she can’t wait for the Blood Brothers’ prophesised Eclipse to come soon enough.
When this fateful night arrives – having gained the trust of the Falcon family – she is to assassinate Liam and his Kin.
Alas, Jezebeth suspects that if she has to endure another tedious sermon on the all-pervading light of Elrath, she may well impale the speaker before he finishes his first sentence.OffBck

Jezebeth was a Knight serving in the Holy Falcon Empire's imperial guard. Charged with protecting the heiress of the family, Gwendolyn Falcon, she assisted Duke Anton Griffin during the Second Eclipse.

Once revealed as a Demon cultist, she was found and defeated by the Duke. Following that, she returned to Sheogh, where she guarded the Invisible Library. Once Raelag brought the Library to Ygg-Chall, she was killed along with the other Demons.

Jezebeth is rightfully proud that she has achieved her high standing in the Demon ranks thanks to her temptress' talents. Worshipping her as a shining example, Jezebeth's Succubus followers strive to equal her ability to seduce and murder for the glory of their Sovereign.OffBck

Jezebeth was selected to be the leader of the siege on Falcon's Reach. With her companion, Ugrul, she succeeded in destroying the capital and capturing Empress Maeve Falcon. Nonetheless, Maeve revealed that her son, Brendan, was still alive and out of Jezebeth's reach, leaving her task unfulfilled. Because of the prophecy stating that the Holy Falcon Empire exists as long as the its heir lives, Kha-Beleth took Jezebeth to Sheogh.

However, Jezebeth escaped, hiding in plain sight at the headquarters of the old Holy Inquisition Castlerose. Though she was found by Empress Maeve's friend, Duke Ivan of Griffin. Jezebeth tried to negotiate, wanting to be spared, by revealing where Maeve's son, Brendan, was located. However, Duke Ivan wouldn't believe her and killed her once more.[1]

Eventually, Jezebeth was reborn once again. Having dated numerous Demons up to that point, such as Lorhish or Azexes, she strove to reclaim her status in Sheogh. While punishing one of her Human servants, she encountered Aidan Unicorn, whom she mistook for another slave. Unable to resist the artifact in his possession, the Blade of Binding, she was commanded to fight the young boy. Once she was defeated, the boy demanded her to lead him to Azexes, making her serve as his guide through Sheogh.

Jezebeth is a Demon Lord.

Jezebeth is a Vindicator in Tempt Not a Desperate Man and a Chaos Lord in A Battle Lost and Won.

The Doom That Came to Konos: Jezebeth is one of Raelag's enemies, captured Invisible Library.

When Aidan encounters her, she burns a captive alive for disobedience. For this, Aidan has to fight her. When she is defeated, Aidan uses her as a guide of Sheogh.

Jezebeth is a level 3 demon. She has 20 hit Points.

Jezebeth appears as a hero card. She is the leader of the Inferno faction. 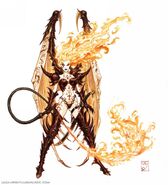 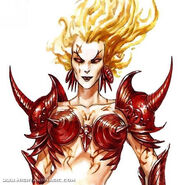 Jezebeth, in Clash of Heroes, shouting 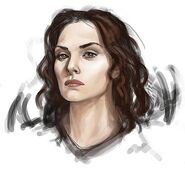 Jezebeth, in Heroes VI, as a human 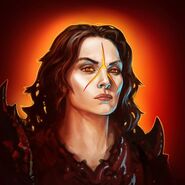 Jezebeth, in Heroes VI, as a demon

Retrieved from "https://mightandmagic.fandom.com/wiki/Jezebeth?oldid=149913"
Community content is available under CC-BY-SA unless otherwise noted.