This article is about a Warlock and a Sorcerer of the Ancient universe. For his Ashan counterpart, see Jeddite (Ashan). For other character sharing his name, see Jeddite.

Jeddite is a hero in Heroes III and Heroes IV.

Some say that Jeddite has seen the face of Zenofex, but many contend that since Jeddite is still alive, the rumor of a meeting could not possibly be true. Jeddite has never confirmed nor denied the rumor.OffBck

Some sorcerers may enjoy causing destruction, but Jeddite worships it. He is a dark fanatic wholly committed to the ultimate dissolution of the universe. No one knows why he adopted such insane beliefs, but neither can anyone convince him to turn to another path.OffBck

Jeddite is a Warlock. He starts with advanced Wisdom. 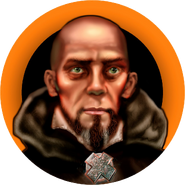