Sareth - son
Isabel Greyhound is a Knight and the main protagonist of Heroes of Might and Magic V, the former Empress of the Holy Griffin Empire who succeeded her husband, Emperor Nicolai Griffin. Marked at birth to act as a pawn in Kha-Beleth's schemes, she is also the mother of the Dark Messiah, Sareth.

Only child of the ruling family of the Greyhound Duchy, Isabel was brought up in isolation surrounded by nannies and servants. Now that war has come, the young Queen feels driven to go to the aid of the Empire. Dedicated to her goals, Isabel exploits the few things she has - her wealth and nobility - without hesitation.OffBck

The only child in the ruling family of the Greyhound Duchy, Isabel was predestined to be a key figure in the history of Ashan ever since her birth. During a Blood Moon eclipse in 951 YSD, which started the War of the Gray Alliance, Kha-Beleth the Demon Sovereign marked an infant girl - the future mother of the Demon Messiah. This girl, as Tieru would later - too late - deduce, was Isabel.

Raised by nannies in far-from-warlike conditions, Isabel was nevertheless engaged by Nicolai Griffin, then-King of the Holy Griffin Empire, and agreed to a marriage. However, their wedding ceremony in 969 YSD was disrupted by demons, signifying a new major demon invasion and the start of a military conflict that became known as Queen Isabel's War.

Nicolai went to the battlefront, commanding his loyal knight, Godric, to bring Isabel to the Whitecliff Summer Palace. While at first Isabel obeyed the order to stay in the Palace's relative safety, she decided to help her husband after receiving news that the demons were pressing Nicolai hard, capturing more and more cities - for she believed that it would be only a matter of time before the war would come to them. She told Godric and abbess Beatrice to seek help from Cyrus of the Silver League and King Alaron of the Elven kingdom of Irollan, respectively. Meanwhile, Isabel herself stayed in the center of the Empire, forming a battle-worthy army out of militia and resolving local disorders - clueless that the demons were, in fact, sent to capture her and had no interest in the rest of the Empire.

Eventually, she was lured into a trap by Biara, a succubus disguised as Beatrice (whom Agrael had killed earlier to be able to spy on Isabel) - expecting two legions of elven Blade dancers under the command of Findan, she found Agrael instead, and Biara revealed her true form. Isabel was taken into a prison near the old fortress of Dunmoor, bound to be brought to the Demon Sovereign, but Godric - whose diplomatic mission to the Silver Cities had failed - freed her before Agrael had a chance to take her to Sheogh. Isabel sent Godric to her fiancé, Nicolai, to warn him about the demon armies marching on Dunmoor.

A fierce battle followed, during which Nicolai was fatally wounded by Agrael - so fatal that even the Archangels of Elrath were unable to help - and while Isabel managed to fight through Agrael's forces, it was too late. With his dying words, Nicolai ordered Godric to protect his would-be wife; little did he know, however, what he would unleash by naming Isabel his successor on the throne.

Determined to bring back her husband - in part motivated by love, in part due to the growing political resistance proposing their own pretenders to the throne - Isabel did the unthinkable: she made a deal with the outcast necromancer Markal, who promised to do what even the power of Elrath could not. Markal, for his part, told Isabel that he needed to recapture and rebuild the town of Lorekeep, destroyed by the Wizards a long time ago, and to retrieve four parts of the Vampire's Garment, separated by Cyrus: the Amulet of Necromancy, the Staff of the Netherworld, the Cloak of Death's Shadow, and the Ring of the Unrepentant.

Godric, too, initially joined Isabel and Markal on this quest, because of his oath to the Queen and because of his fresh memories about Cyrus' attitude to the suffering Empire. However, seeing how Markal, manipulating Isabel, conquered the Silver Cities and killed Cyrus just to obtain the artifacts, Godric defected, disregarding the oath and taking the Amulet with him to the fortified town of Hikm, a former Silver City. In an attempt to recover the Amulet, Markal kidnapped Godric's daughter Freyda and eventually defeated Godric himself; however, at Isabel's request, he was spared, only imprisoned.

On their way back to the Griffin Empire, Isabel was attacked by the Demon Lord Veyer, who was, however, defeated by Raelag, the leader of the Dark Elven Shadowbrand Clan. Isabel thanked him for saving her life, and Raelag explained that the demons were only interested in her, suggesting she hide. Markal, however, discarded his claims and told the Queen to head to Nicolai's tomb before she had time for second thoughts.

As promised, Markal brought Nicolai back from the dead - in a sense. The former King actually became an undead being, a Vampire lord, and a pawn of Markal. As Isabel kneeled before her former love in tears, the Necromancer assumed control over the Griffin Empire - not so holy anymore.

For the duration of Nicolai's invasion of Irollan, Isabel was effectively cut off from any real power in the Empire. Markal and his undead were now the masters, resulting in a wave of refugees settling in uninhabited lands between the Empire and Irollan — only for a short time, until the undead Nicolai started his invasion.

After the triumvirate - Findan, Cyrus' son Zehir, and the freed Godric - liberated most of the Empire and put an end to Markal's rule, they were joined by Raelag and besieged Talonguard, the capital city, where Isabel resided. Zehir tried to purge her of Kha-Beleth's influence by performing the Rite of True Nature, the instructions for which had been written by Tieru on a scroll. However, in the middle of the ritual, Biara - this time masquerading as Raelag's aide, Shadya - revealed herself and, holding Isabel, teleported to Sheogh, finally bringing her to the Demon Sovereign.

With the help of the Heart of the Griffin, the four heroes followed Biara. They assaulted the Demon Sovereign's citadel and confronted and defeated Kha-Beleth himself. However, they were too late, and Isabel had already given birth to Sareth, the Dark Messiah. The heroes decided to take who they thought was Isabel back to Ashan, despite Findan's plea to leave her in the demon realm. However, they took Biara, disguised as Isabel, as Raelag took the real Isabel away from the realm of Sheogh.[1]

Queen of the Griffin Empire, Isabel was the unwitting victim of the centuries-old plans of the Demon Sovereign. Luckily, she was saved by troops of Rangers, Wizards, Warlocks and Knights from Sheogh itself in the final moments of the war that bears her name. Though she has literally been through hell, her faith has remained steady and her troops benefit from her holy blessings.OffBck

While Biara under the guise of Isabel returned to the Empire with Godric, the real queen retreated with Raelag, her new love, to a secluded location in Ygg-Chall, allowing her doppelganger to sow chaos and provoke civil war. She went out of hiding when Ylaya approached her and Raelag, and soon parted ways with him when Raelag headed to the east under the guidance of Tieru's spirit. Isabel joined Freyda's rebellion, participating in the sieges of Tor Hrall and Talonguard and eventually killing Biara, her impostor. However, she subsequently abdicated from the throne in favor of Freyda, founding the Holy Unicorn Empire.

Raelag's Offer: Isabel shows her gratitude to Raelag after defeating Veyer, though she still continues to go to Hall of Heroes with Markal.

The Refugees: Isabel witnesses Nicolai's revival, being shocked when he tried to attack her.

The Alliance: Isabel needs to be defeated so Zehir can perform the ritual. When she is, however, Biara takes her to Sheogh.

The Will of Asha[edit | edit source]

Flying to the Rescue[edit | edit source]

The first released sketch of Isabel 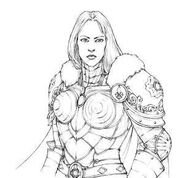 Isabel, in the intro

Isabel's in-game portrait
Add a photo to this gallery

Retrieved from "https://mightandmagic.fandom.com/wiki/Isabel?oldid=158854"
Community content is available under CC-BY-SA unless otherwise noted.