Hut of the Magi

"When entering any Hut of the Magi, the map is revealed around each Eye of the Magi on the map."

The Hut of the Magi (called the Window of the Magi in Heroes IV) is an adventure map structure in the Price of Loyalty, Heroes III, Heroes IV, and Heroes V.

Visiting it will reveal the area around the Eye of the Magi, another adventure map structure. The eye cannot be interacted with, and its only use is to provide sight through the Hut.

In many scenarios, the Hut will show the player where the goal of the scenario can be found, or where they should go next, making it easier to figure out what to do at that point.

In Heroes IV different colored Windows of the Magi can appear on the same map; visiting them will only reveal the area around eyes of the same color. 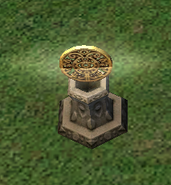