The expansion pack featured numerous improvements over the base game. The most notable content included was the addition of the new Fortress faction, composed of Dwarves, with exclusive access to Rune Magic (which requires resources instead of mana for casting). Three new campaigns, continuing the original game's storyline, were added, along with a selection of standalone scenarios. Fourteen new artifacts, three new creatures and additional campaign heroes were included, as well as the long-anticipated map and campaign editor which was not present in the base game (though was added in a downloadable patch). Caravans (originally seen in Heroes of Might and Magic IV), simultaneous turns in the multiplayer mode and a random map generator were also supplied. Finally, the Renegades - a sub-faction composed of seven non-recruitable creature types - were added, featuring prominently in the storyline.

An underground kingdom of fire worshiping dwarves that are rivals of the Dark Elves over the land beneath the surface. Dwarven units can be enhanced with various runes at the cost of some resources.

It should be noted that Simultaneous Turns only works until the first conflict. Because of the definition of a conflict (below), it is possible for simultaneous turns to end literally on the first turn of the game. As the manual states:

A "conflict" is a situation where players can affect each other. Since the game is essentially turn-based, any encounter between two or more players can cause a game mechanics failure. Conflict probability is estimated at the beginning of each turn. If conflict is possible, the game is permanently switched to the basic turn-based mode. All players receive a message confirming this.OffBck

Godric has been stripped of his command and his daughter is put in command. Freyda has doubts about many of the decisions that Queen Isabel has made, including the promotions of several soldiers who seem more interested in killing than preserving the law. Isabel orders Freyda to take care of rebel troops within the Griffin Empire who now see Isabel as unfit to rule due to her change in behavior as a result from her return from Sheogh. Freyda is needed to destroy two rebel camps. Freyda tries to talk to Archbishop Randall and Lord Caldwell but Laszlo and Alaric interrupt and Freyda, with no choice, has to fight. Freyda and Laszlo discover that the elves help the rebel and that villagers give them food and also that Queen Isabel has sent reinforcements which are trapped by the elves. After helping the reinforcements, Freyda and Laszlo destroy the two rebel camps.

Freyda still has doubts and her loyalty is put to the test when Isabel threatens to hand her father (who has been locked away in a prison) over to zealous inquisitors if she does not fall into line. She and Laszlo are ordered to seek out rebels as well as reports that demons have started to appear, and that the two are connected.

Freyda is now ordered to take care of Duncan of the Stag Duchy. There have been reports that he has the young prince hidden away somewhere. It is also rumored that he has an alliance with a dwarven outpost. Freyda however, decides to let him go to rally troops against Isabel.

Following information that Duncan gave, Freyda must start negotiations with the dwarves who currently have custody of the young prince. Freyda successfully manages to contact Wulfstan, captain of the Dwarven garrison and friend of Duncan. However, Laszlo impatient with being ordered to stay behind, then attacks the garrison.

After escaping from the frozen lands of the Dwarves, Freyda sets out to free Duncan from the Red Haven prison and acquire a ship to take her to the city of Talonguard so she can free her father, Godric, before word of her betrayal reaches the Red Queen.

War has erupted between the Griffin Empire and the Dwarves who were once allies. Wulfstan is in charge of the garrison defending the border and is slowly losing. His brother blames him for the war saying that it was because he gave sanctuary to the young prince that Isabel is attacking them. Wulfstan manages to hold the Griffin empire for a short time.

Wulfstan's brother has taken the young prince by force, killing soldiers protecting him as well as going to the king of the stone halls and declaring his brother a traitor, causing Wulfstan to be declared a deserter.

An alliance has been made between the Stone Halls and the Griffin Empire, based on Isabel's promise to cancel the treaty she has with the dark elves and to let the dwarves attack them. Elsewhere, Wulfstan plans to disrupt the Stone Halls by cutting off supplies and eliminating any reinforcements.

Wulfstan now has to face off against his own brother who has managed to worm his way into the king's favor. Wulfstan's brother has lied, saying that Wulfstan still has the young prince in his company and uses this to take care of Wulfstan once and for all.

It is finally time to take care of Laszlo the Butcher. Wulfstan now has the aid of Duncan who wants to take back his home. This will be sweet revenge for Wulfstan as it was Laszlo who started the war in the first place.

The clans that were once united by Raelag have again split into many waring factions, what is more disturbing is that old rituals are being practiced once again. Ylaya who is the keeper of the law for the Shadowbrand Clan is charged by the Daughter of Malassa to find out what she can about these rituals which threaten all.

Ylaya has been discovered and must head for Shadowbrand territory where she is safe. She is chased by those of the Soulscar Clan who have been allies of the demons for ages.

After consulting with the Daughter of Malassa, Ylya searches for Raelag who has been missing since the war. She must find him so that he can once again reunite the clans and put an end to the old rituals. However she finds an unexpected ally.

Ylaya has discovered that it is Biara who leads the Griffin Empire disguised as Isabel. Isabel has been with Raelag in his home within the caves of the dark elves. The dragons have abandoned the dark elves after hearing that their followers have gone over to the old ways. The only way to seek their help is to accompany a black dragon to the mating grounds of the dragons.

The time has come to put an end to the Alliance based on the workings of Biara, the usurper. All the heroes will need to settle differences to stop a common threat.

The story continues some time after the main events of Heroes of Might and Magic V (969-970 YSD). Queen Isabel has returned to her empire, but the people speak of a changed queen, not the same one that went to Sheogh. Freyda, the daughter of Godric, is sent of to stop "rebels" as Queen Isabel calls them. Freyda is tasked to retrieve the young prince Andrei, and is sent on a chase to the home of the Dwarves, Tor-Hrall. There, Laszlo, Freyda's ally, attacks the Dwarves while Freyda is at council with them. However, because of Wulfstan's kind heart, Freyda is let free. From this point on, Freyda no longer fights for her queen. She learns that her father has been kidnapped and rallies the help of Duncan, who assist her in getting a vessel to safely transport her to the empire.

The attack on Tor-Hrall leave the Dwarves slightly shaken. Wulfstan and his brother Rolf have opposing views, and thus Rolf allies himself with the Queen, while Wulfstan fights his own battles. As a result of this civil strife, Wulfstan ends up facing many Dwarves, however, plenty of those Dwarves tend to rally to his aid after realizing their own mistakes. As a result, Wulfstan's influence amongst the Dwarves grows. Eventually Wulfstan teams up with his friend Duncan and together they set a distraction to ensure the safety of Freyda's voyage. The city of Tor-Hrall is now recaptured in the name of Wulfstan. Soon after that, Laszlo is killed.

Ylaya is a Keeper of the Law and is told by the Daughter of Malassa to find out what rituals are being practiced by the Soulscar clan that do not heed Malassa herself. When Ylaya is discovered, she flees and seeks one who has been gone for many a month - Raelag. She finds him with Isabel and discovers that this Isabel is the real Isabel and the Queen is actually the succubus Biara, who has been spared on several occasions already. After making an alliance with Black Dragons, Ylaya brings down a great portion of the Soulscar clan, and the Dark Elf clans can thus be temporarily at peace. While that peace lasts, Ylaya and Raelag have one less enemy. Before the final battle, Raelag splits off from the group to achieve something that is to help in the war. Ylaya, Freyda, Duncan, Wulfstan and Isabel all meet up and combine forces to capture Tor-Hrall once and for all. King Tolghar is killed during the battle and the Empire's forces are seen retreating. After the climactic battle, it is revealed that Archbishop Alaric will still serve Biara. Raelag is seen talking with Tieru about something in the east and it is assumed that this is a direct reference to the Orcs, who are introduced in Tribes of the East.

Patch 2.1 was released on January 30, 2007 and contained fixes to various bugs, balance changes and improvements to the map editor. 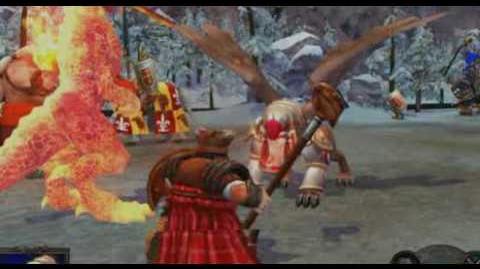 Trailer of Heroes of Might & Magic V - Hammers of Fate
Polski Русский
Community content is available under CC-BY-SA unless otherwise noted.
Advertisement