Heroes of Might and Magic III: Armageddon's Blade
Heroes Chronicles: The Sword of Frost

Following the events of Heroes Chronicles: The Sword of Frost, Gelu, the leader of Erathia's Forest Guard and wielder of Armageddon's Blade, attacks Kilgor, the Barbarian King of Krewlod, in an attempt to claim and destroy the Sword of Frost. As foretold by a prophecy, when Armageddon's Blade and the Sword of Frost clash in battle, the result is a massive explosion (known as the Reckoning), which destroys the world of Enroth. Many of the inhabitants of the planet, however, manage to escape through mysterious portals that appear during the Reckoning which lead them to another world, called Axeoth - also the setting for Might and Magic IX. Included among the refugees are many of the heroes of previous installments of the series, and many return to their old ways shortly after arriving on their new home.

The story of Heroes of Might and Magic IV unfolds primarily through the game's six campaigns, each of which establishes how the major kingdoms of one of Axeoth's continents were forged in the wake of the Reckoning, and the arrival of the Enrothian refugees on Axeoth. Each of the campaigns centers on a faction leader, and tells the story of how that leader came to prominence. Unlike Heroes of Might and Magic III, all of the six campaigns are accessible from the beginning, and each unfolds as a stand-alone tale.

In the Haven campaign, The True Blade, Lysander, a loyal knight formerly in the service of Queen Catherine Ironfist, rules over the nascent kingdom of Palaedra, inhabited mainly by refugees from the kingdom of Erathia. His command, however, is challenged by a usurper named Sir Worton, who claims to be the only surviving heir to the Gryphonheart dynasty. Many of Lysander's generals are drawn to Worton, forcing the lord to expose Worton as a fraud or lose control of his kingdom.

At the start of the Stronghold campaign, Glory of Days Past, Waerjak, a barbarian chieftain, despairs over the changes that have come over the barbarian community. In the wake of Kilgor's death, his people have descended into interfactional strife, and are in danger of wiping themselves out. Intent on restoring the barbarian kingdom to its more peaceful state before Kilgor's ascension, Waerjak sets out to prove his strength and to subdue his rivals, guided by his mentor, Tarnum (previously the protagonist of the Heroes Chronicles series).

The game's Academy campaign, The Price of Peace tells the story of Emilia Nighthaven, the peasant daughter of an Enrothian glassblower. On Axeoth, however, she finds herself taking command of a community of frightened refugees and forging them into the kingdom of Great Arcan. Queen Emilia's success, however, attracts the attention of Gavin Magnus, the Immortal King of Bracada from Heroes of Might and Magic III and Might and Magic VII, and his genie servant, Solmyr, who seek to prevent Axeoth from meeting the same fate as Enroth (i.e. being destroyed) by magically depriving its entire population of their free will.

In the Preserve campaign, Elwin and Shaera, Elwin, a simple elf from the Elven kingdom of Aranorn (mainly populated by survivors from AvLee), is in love with Shaera, but their romance is threatened by Lord Harke, a powerful rival for Shaera's affection. Elwin's continued pursuit of his beloved plunges the region into internecine war, and whoever emerges the victor will not only win Shaera's hand in marriage, but the throne of Aranorn, as well.

Half-Dead, the Necropolis campaign, relates the tale of Gauldoth Half-Dead, the half-living, half-undead victim of a necromantic spell that he cast to save his life which went horribly wrong. Tired of living on the scraps of food he can steal from fearful villagers, Gauldoth unites the forces of the surviving Necromancers and demonic Kreegans from Enroth's old kingdoms of Deyja and Eeofol into Nekross, a powerful and feared kingdom, but he is forced to act as a protector for both the living and the dead when a powerful being from another dimension arrives with plans to end all life in the universe.

A Pirate's Daughter, the game's Asylum campaign, introduces the only daughter of a famous Pirate, Tawni Balfour. Tawni inherits her father's ship and crew following his unfortunate death. Sailing down the coasts of the Gold Sea, fighting feared buccaneers, sea monsters and mermaids alike, Tawni intends to claim her father's mantle as Axeoth's most feared pirate captain, all while having to face her own shady past.

Heroes of Might and Magic IV introduces a number of major changes to the series.

Unlike previous games, where they had little active role in combat, heroes are now present on the battlefield with their troops. It is now possible to have armies with more than one hero, or with no heroes at all, although armies without a hero are incapable of performing certain tasks, such as capturing enemy towns or structures. Both the adventure and combat maps have been converted to a fixed-view isometric 3D display. The traditional hexagon-based battle grid has been converted into a much higher-resolution square-based grid, making it easier to feature units of different sizes. However, the lack of the easy to visualize hexagons has been criticized for reducing the ability of the player to use terrain to a strategic advantage (especially tricky is anticipating the paths of ranged attacks, both offensively and defensively). Non-hero spellcasting units are now given proper spell selections. Retaliation now occurs simultaneous with the attack, and ranged units are now capable of retaliating against ranged attacks. Each individual troop unit now has its own movement allowance on the adventure map, and units can be split off independently of the main army; however, the tradeoff is that troops can no longer be "shuttled" from hero to hero in order to move an army large distances in a single turn. Logistics have further been restricted by the elimination of the "Dimension Door" spell, as well as "Fly" and artifacts that allow flight, with the only remaining long-distance movement spell being "Town Gate," which only takes an army to the nearest town. This, in turn, is partially compensated for by the elimination of the need to revisit resource-producing structures each week, and the introduction of a new Town structure, the Caravan, which can be used to move troops and Heroes invisibly and rapidly between towns, as well as bringing troops produced at external dwellings directly to a town.

The skill system has also undergone a significant overhaul, and all Heroes of a given class start out with the same skills; the player has slightly more control, though, over the development of the Hero than in previous versions of the game, and Heroes can "evolve" into over 40 different specialized classes, based on which combination of skills they select. There are 9 different primary skills (5 of them magic-based), each of which has three secondary sub-skills. Each of these 36 skills have 5 levels of progression as opposed to the 3 levels in the previous games, and an individual Hero is limited to a maximum of 5 of the 9 skill sets. A small number of these skills are shared with earlier versions of the game, and some of the new skills can dramatically affect strategy (e.g., a Hero with Grandmaster Stealth is invisible to all hostile or neutral Heroes and creatures). Troop units can no longer be upgraded, and the number of unit levels has been reduced to four. Every level has two possible units, but each town can only build one creature dwelling per level. For example, an Order-aligned town can build either an Altar of Wishes (produces Genies) or a Golden Pavilion (produces Nagas), but because Genies and Nagas are both level three creatures, both structures cannot be built at the same time. The exception to this involves level one creature dwellings, both of which are allowed to coexist within the same town. The creature dwellings themselves now accumulate new creatures every day, as opposed to the start of each new week. A number of Heroes IV innovations raised controversy among old players; this can be said about daily creature growth, simultaneous retaliation, lack of creature upgrades previously found in Heroes II and Heroes III, the new castle siege system (which gave far fewer advantages to the defending player), and the treatment of heroes as units with no unique specialties for each individual hero. Other issues of disappointment were the reduced number of towns and creatures, alignment revisions (e.g. merging the Necropolis with Inferno), the addition of "Death" aligned Venom Spawn, the treatment of Ballistas as a separate unit, and the increased limitations of spellcasting (while previously available for any town, most town spells were made exclusive to each town).

Eventually, Heroes V disregarded almost all new features of Heroes IV, reverting to Heroes III-style gameplay, but then the game was criticized for the removal of useful features like caravans and flaggable windmills and water wheels. Later some features, such as caravans, were revived in Heroes V's expansion packs.

The nine town alignments of Heroes III have been reduced to six. Five of these alignments correspond to a particular type of magic (Life, Order, Death, Chaos, Nature). The sixth alignment (Might) emphasizes physical combat, and has no magic-based heroes. Two levels of creatures can be purchased in each town, plus eight other creatures that can be purchased from the Preserve town's creature portal dwelling. There is no longer any "neutral" faction for miscellaneous creatures as there was in previous games; instead, there are nine creatures that cannot be purchased in any town, but are still aligned with a specific town (for instance, the Haven-aligned peasant's dwelling can only be found on the Adventure Map). Each town also has two different hero types (one magic hero and one might hero) that are aligned with it, other than the Stronghold, which only has a might hero.

A soundtrack accompanying the game was released by 3DO in 2002. Composed by Paul Romero, Rob King and Steve Baca, it comprises almost 73 minutes of music spread across 25 tracks, on one CD.

Most of the featured music appeared in the game, but additional tracks were also included; the soundtrack includes both the main theme from The Gathering Storm expansion, plus an additional composition, "Wandering" (believed to have been the planned track for grassland terrain, which was not completed at the time the game went gold). It does not include the main track for Winds of War, which was composed later.

Two expansion packs were released for Heroes IV: The Gathering Storm (2002) and Winds of War (2003), both for Microsoft Windows only. The Gathering Storm offers six campaigns, more than 20 maps, 16 additional artifacts, four new creatures, and a multiplayer update. Each of the first five campaigns features a new specialty hero. The Gathering Storm also features an upgraded editor, which allows full access to new heroes, adventure objects, artifacts and creatures. A new music soundtrack is also included.

Winds of War introduces three new creatures and six new campaigns, which collectively tell the story of the invasion of the kingdom of Channon by the leaders of its five neighboring kingdoms. Winds of War was the last installment of the entire Might and Magic series to be developed by New World Computing. Afterwards, the bankruptcy of the 3DO Company led to the sale of the Might and Magic franchise to Ubisoft.

Heroes of Might and Magic IV Complete was released in 2004, and included both expansions. 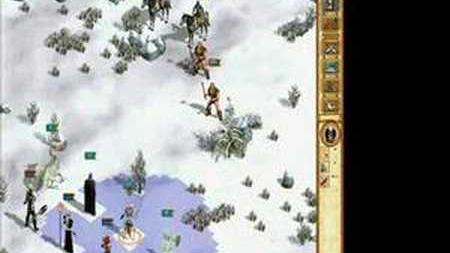 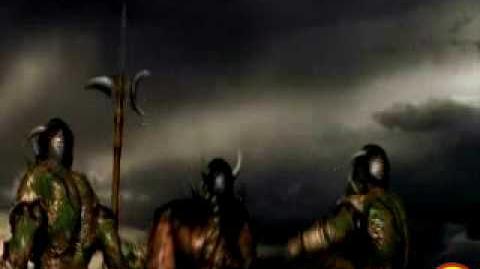 Heroes of Might and Magic 4 Early Intro Video Render 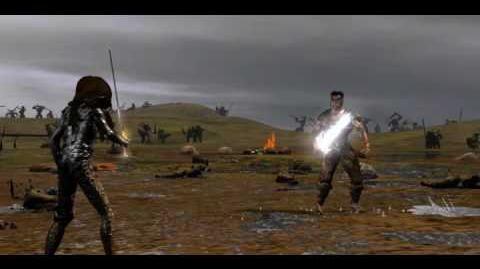 Heroes of Might and Magic 4 Intro Video (2002, 3do New world computing)
Polski Русский
Community content is available under CC-BY-SA unless otherwise noted.
Advertisement