The sequel to Heroes of Might and Magic: A Strategic Quest, it was released on October 1, 1996 to extreme critical acclaim, and was hailed with several awards from numerous publications, meeting with high sales. It received two expansion packs, Heroes II: The Price of Loyalty and Heroes II: Desecrated Lands, and was followed by a sequel, Heroes of Might and Magic III: The Restoration of Erathia, in 1999. It was also partially ported to the Game Boy Color by KnowWonder in 2000.

It is followed by Heroes of Might and Magic III: The Shadow of Death in the series chronology.

While closely similar in design to the first game, Heroes II overhauls some gameplay elements. Hero development is enhanced with secondary skills, replacing the inherent class bonuses of the prequel; fourteen skills are available, with three tiers of expertise which can be achieved upon level-up: Basic, Advanced and Expert. Individual heroes can obtain a maximum of eight secondary skills.

The combat battlefield is enlarged and creature sizes reduced. The game introduces upgrades to the series - with the necessary structures built or adventure map locations visited, certain units can be upgraded, entailing attribute boosts and new abilities. This system was taken further in Heroes III, in which every non-neutral unit receives an upgraded incarnation.

The spell system is revamped with a spell point counter replacing the memorisation model of the original: the Knowledge primary skill now determines a hero's maximum spell point pool, with one point of Knowledge equating to ten spell points. Elementals are also introduced to the Heroes series as recruitable neutrals.

Good and evil faction segregation is introduced, though the concept has little effect on gameplay; it only determines the style of the interface.

Heroes II introduces two factions to the series who would recur in every subsequent sequel - the Wizards and Necromancers, both potent spellcasters. The Wizards lead a union of mystic troops with a noticeable emphasis on ranged combat, while the Necromancers command armies of undead, capable of constantly bolstering their ranks through the unique secondary skill of Necromancy.

The Barbarian, Knight, Sorceress and Warlock factions return intact from the previous game, with minimal changes.

Adventure map structures are places on the game map that you can visit for: upgrades, creature banks, treasures, spells, or for resources, etc.

For the first and, as of yet, only time in the series, the campaign is split into two branches of scenarios, offering players the choice to support either Roland or Archibald (and, midway through, a chance to betray the heir and side with the enemy or continue to support him). Roland's campaign was confirmed the canonical progression of events in Might and Magic VI: The Mandate of Heaven, with many events from Archibald's campaign discounted. In the campaign, the player is represented by The Commander, an unseen general who can choose to serve either heir.

Heroes II opens 25 years after the defeat of Lord Alamar. Morglin Ironfist has died of old age, leaving two heirs to the throne of the Kingdom of Enroth: his sons Roland and Archibald. By tradition, the choice of the heir falls under the Royal Seer's jurisdiction; Archibald, hungry for power, secretly murders the Seer and several of his successors, eventually bribing the most malleable replacement and issuing a proclamation against his brother. Roland flees Castle Ironfist for his westerly summer palace before Archibald can detain him, and incites a continent-wide rebellion against Archibald, initiating the Succession Wars.

In Roland's campaign, the Commander is dispatched to attack and compel the loyalty of the barons nearest Roland's palace, who Roland fears will quickly join his brother's side. After the initial victory, the nobles of west Enroth organise a rebellion against Roland's offence, but are defeated in order to secure taxes to finance the war. With enough gold accumulated, the Commander is presented a choice; travel to the Carator region and secure resources before Archibald can claim them, or assist the Dwarves led by King Rocklin, who have been massacred by Archibald's forces in search of dwarven wealth. Canonically, the Dwarves are saved, earning Roland their unconditional support.

Archibald then contacts the Commander, attempting to persuade him into switching sides. If he refuses, the Commander must oppose and conquer three united enemies against his one city in a pivotal valley. Afterwards, the Sorceresses of Noraston send Roland a plea for assistance, and Lord Halton is brought under the Commander's control to defeat the attackers, led by the rogue necromancer Wyrm. Sister Eliza is then made available for hire. Roland's advisors offer him mixed advice: half say he should muster troops against Archibald, while half claim he should send his forces on a quest to locate the Ultimate Crown. The choice is left to the Commander.

With Archibald's position threatened, his ally - the Death Knight, General Corlagon - mounts a defence on the Ironfist border, while Roland is forced to barricade his troops in a castle to the west. Lord Haart joins the battle, and the Commander succeeds in breaching Corlagon's defence. Roland joins the Commander in the final battle against Archibald's remaining army while Lord Haart is left in charge of the defence. Roland succeeds in reclaiming the final territories and locating Archibald's volcanic hideout, and captures his brother following a brutal siege.

In the retaken Castle Ironfist, Roland sentences his brother for his crimes; he is turned to stone until future generations should take pity upon him and, perhaps, restore him to life. The Court Wizard, Tanir, carries out the necessary spell, and Archibald's statuesque body is interred in the Library.

Archibald's campaign opens with the Commander sent out to make an example of the lords closest to Castle Ironfist. With the nearby nobles forced into his service, Archibald turns his attention to the Krashaw region in northern Enroth, populated by barbarian tribes which King Morglin chose not to conquer. The Commander is ordered to unify them and organise them into foot soldiers. After succeeding, he is given a choice: either assist the Necromantic Order against the Wizards, or shatter Roland's alliance with Rocklin. If the Necromancers are saved, Brother Brax joins Archibald's ranks, while if the Dwarves are slain his cause is joined by the King of the Ogres.

With either task completed, the Commander is sent to conquer the Lorendale Valley barons, who have pledged alliance to Roland's rebel cause. Roland then contacts the Commander with an offer to redeem himself and join the rebels. If he remains loyal to Archibald, Archibald directs him to crush the Wizard-led peasant rebellion with the aid of General Corlagon. With the populace of Enroth decimated, the Warlocks counsel Archibald to send troops to invade Dragon Isle and subjugate the King of the Dragons, while the Commander may alternatively choose to immediately attack Roland's vassals.

Finally, the Commander may choose to have Corlagon muster an army and transport it to Archibald's position, or undertake a quest to locate the Ultimate artifact. Either way, Archibald leads the final conquest against Roland and the remaining rebels in the west provinces. With Roland captured, Archibald becomes the uncontested ruler of the continent, and has Roland imprisoned for life in the western tower, left to rot indefinitely while he plots further conquests.

Like its predecessor, Heroes II takes place on the continent of Enroth, although the geography of several in-game maps remained somewhat inconsistent with later depictions of the realm. Castle Ironfist, while involved in the story, does not appear in any of the scenarios, and is not mentioned by name. The game's logo is a medieval crest of a lion emblazoned before a shield, an image which recurs in the campaign and acts as the symbol of the Kingdom of Enroth.

The design of the continent of Enroth, while not yet fully fleshed out, was recognisably shown in its early phase in the custom scenario named "Enroth", and some campaign maps bear a likeness to areas explored in Might and Magic VI. For instance, the Sorceress' Guild headquarters of Noraston is situated on a peninsula closely resembling the Silver Cove region, while the Krashaw region appears to have been later renamed to the Frozen Highlands.

A rough atlas of the continent as it would appear in Might and Magic VI can also be seen in the mission briefing for one of the campaign scenarios.

Jon Van Caneghem again spearheaded the design and development, which took a shorter time to complete than the original game. April Lee created numerous creature animations and illustrated the manual. The game's music was composed by Rob King and Paul Romero, both of whom also worked on its predecessor. The 3DO Company reportedly paid New World Computing $13 million dollars for the game's publishing rights, a move largely inspired by the success of the first Heroes installment.[1]

Heroes II was universally acclaimed upon its release, garnering several critical awards and attaining high sales.[2] It was voted the sixth best PC game of all time in PC Gamer's May 1997 edition, a publication which also awarded it the title of Best Turn-Based Strategy Game of 1997, proclaiming it "one of the best strategy games of this year -- or any year, for that matter."[3][2] It received a Gold Award from Games Domain[4], and 5 out of 5 stars from Adrenaline Vault[4] along with the title of Best Strategy Game for 1996/7.[5]

Computer Gaming World awarded it 5/5, naming it "the Godfather 2 of computer games -- a sequel that surpasses an original that was once thought unbeatable."[5][2] It was ranked at #1 for several months on the Computer Gaming World readers' poll[6], and was interred in the CGW Hall of Fame (a position within the series it shares only with the original Might and Magic: Secret of the Inner Sanctum).[7] GameSpot awarded it a rating of 8.2, lauding its vibrant graphics and the addition of new content and gameplay elements, proclaiming it "a must-have for fans of the first title."[8] It also achieved the title of Acorn User Best Game of 1999.[9]

In 1999, GameSpot featured the music of Heroes II as one of the Ten Best Game Soundtracks, praising its ethereal quality.[10] In April 2000, PC Gamer's readers voted the game #19 overall in their Readers All-Time Top 50 Games Poll.[11] The game's Gold Edition is currently available for purchase at Good Old Games, where it maintains a 5-star user rating based on 700 votes.[12]

Some copies and localisations of the game included Heroes of Might and Magic II: Desecrated Lands, a psuedo-expansion pack CD containing a large collection of unofficial maps, at no extra cost. 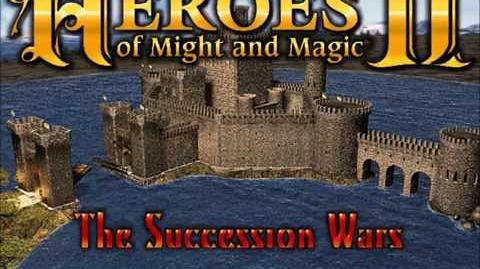 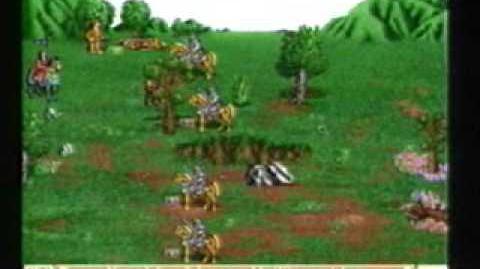 Heroes of Might and Magic 2 The Succession Wars Preview Trailer (1996, New World Computing 3DO) 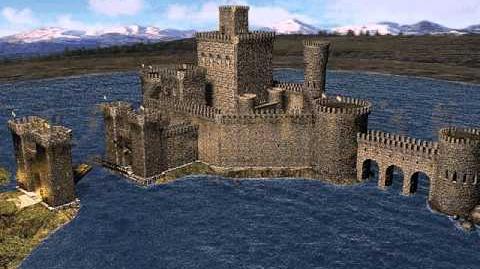 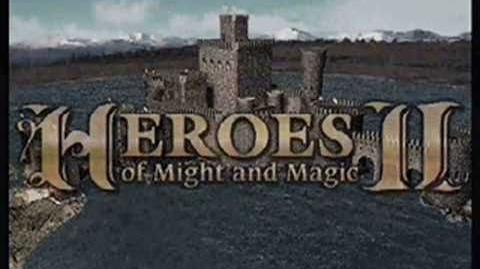 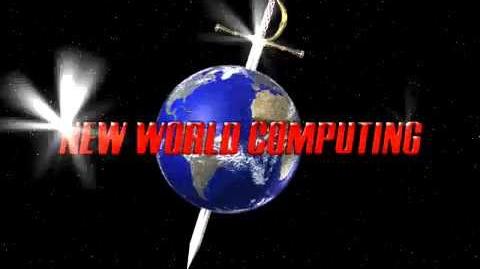 Heroes of Might and Magic II The Succession Wars intro