For the faction in other games, see Haven.

Holy Falcon Empire
Haven is a faction of humans, who worship Elrath, Dragon God of Light.

The Knights and Priests of the Holy Empire worship Elrath, the Dragon God of Light, who grants them magical powers based on his elemental dominion. Their objective is to lead a life worthy of Elrath's ideals of Truth and Purity, to shape the world in his image, and to spread his sacred Light...

The Falcon Empire often had conflicts but they were rarely serious or bloody, however with the death of Empress Maeve, the Empire has fallen into chaos. Now each noble wants the throne for their own needs. 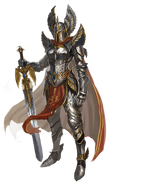