Hangvul in Heroes V and Trial by Fire

High Priest Hangvul is a character in Heroes of Might and Magic V add-ons, Hammers of Fate and Tribes of the East, and in Might & Magic: Heroes VII add-on, Trial by Fire.

A stolid priest of the Deepflame clan, Hangvul has gone to war against the Dark Elves to defend his nation. Though he carries little of his brethren's insensate hatred for his foe, Hangvul will not shirk from the battle and savagery necessary to end the Dark Elf threat.OffBck

Hangvul is a High Priest with a dark past. When the dark elves inhabited the tunnels, he tried to get them out by destroying their sanctuaries of Malassa. This conflict is now known as the War under the Mountains. This was a high price, as their hero, Agbeth, swore revenge. In the end, Agbeth tortured Hangvul and Hangvul lost his left eye and left arm. Though he crafted the body parts using the dwarven metal, his hatred against the dark elves was even stronger.

The Ambush: Hangvul clarifies to the king Tolghar Queen Isabel breaks the alliance with the dark elves and wants Andrei, Nicolai's relative.

The Break: Hangvul and Rolf attempt to persuade Tolghar not to fight the dark elves personally, but fail.

Summoning the Dragon: Hangvul is brought by Wulfstan to the Earthfire Shrine, where Arkath chastises him as an "unbeliever."

Hate Breeds Hate: Agbeth demands Hangvul to be tortured because of the attack of Malassa's shrines.

Hangvul appears in Heroes of Might and Magic V add-ons, Hammers of Fate and Tribes of the East, and in Might & Magic: Heroes VII add-on, Trial by Fire.

For some reason, Hangvul's specialization, which is identical in effect to Erling's Keeper of the Flame, and even uses the same icon, is referred to as Golden Tongue - which is actually Rolf's specialization, and has a very different effect and icon. 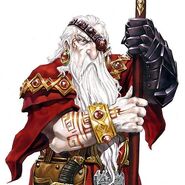 Hangvul's headshot
Add a photo to this gallery
Retrieved from "https://mightandmagic.fandom.com/wiki/Hangvul?oldid=158534"
Community content is available under CC-BY-SA unless otherwise noted.