Dead (as of Hammers of Fate)

"I have always had and always will have the interest of the Griffin Empire as my sole guide."
—Godric [src]

Godric Unicorn is a character in Clash of Heroes, Heroes of Might and Magic V and in its add-on, Hammers of Fate.

Godric was a promising Knight of the Holy Griffin Empire, being a member of Unicorn Duchy. When he went to the site in Irollan to meet Anwen and Nadia with his siblings, Aidan and Fiona, demons attacked the camp and dragged him as a prisoner. Fortunately, Godric was rescued by Anwen.

Later, he went to Talonguard, but his Duchy was declared as an enemy and was attacked. He survived and went to her aunt, Evelyn, and disguised himself as Sir Ignatius Thunderblade and participated in the Talonguard's tournament. He received a crown from the Emperor himself and was to bring it to Count Carlyle. Carlyle was bargaining with Lord Bloodcrown and seeing Godric he went to the Emperor to kill him. Godric soon went to the Emperor and killed Carlyle, who turned into a monster, using the rod he received from Bloodcrown.

Later, he went to the Silver Cities to re-unite with his siblings, but it was a trap made by Azh Rafir. However, he was rescued by Nadia. Azh Rafir summoned Aidan, so Godric defeated his brother to re-gain his control. When the Blade of Binding was drained of its power, weeks later, he (along with his siblings) were thanked by the emperor and his son, Alexei.

Once, he was sent to make an alliance with the Wizards of Silver Cities against the Demon invasion. Despite the odds, Godric, along with Dominic, did retrieve the Pendant of Mastery from a Dragon Utopia, giving it to her sister, Queen Fiona, as a token of new alliance.

Being related to King Nicolai, he ensures that nothing happens to him. When his sister Fiona died, he blamed the councillor, Markal, for her death, which got Markal banished. When Nicolai met Isabel Greyhound and wanted to marry her, the demons came, so Godric took Isabel out of the Talonguard Cathedral and they went into hiding.

Godric is rightfully upheld as a model knight and sterling example of chivalric ideals. Demanding the highest standards of courage and integrity from both himself and his followers, Godric commands respect wherever he goes. Troops under his banner trust him without question, as his history of great deeds and his favor in Elrath's eye convince them that his mere presence upon the battlefield can guarantee victory.OffBck

Isabel, along with Beatrice, convinced him that the Wizards of Silver Cities should be called to help them. When Godric (with Freyda, his daughter) came to the Holy Griffin Empire after the failed mission, Godric came to free the Queen from prison near Dunmoor. After he got help from Nicolai, he rushes in battle, only to find him dying. Godric, per Nicolai's wish, made an oath to protect Queen Isabel from harm.

Godric has been later instructed to find the murderer, Agrael, and capture him, but he failed. When Markal came and defeated the rebels, Godric hesitated that Markal shouldn't be trusted, but with him captured Hikm. When Isabel and Markal defeated Cyrus and the mages of Silver Cities, he revolted and presented a threat when he could've destroyed the Amulet of Necromancy, but Markal defeated him. Isabel sends him in prison, despite Markal's wish to kill him.

He was imprisoned for some time until Cyrus's son, Zehir, frees him and with Findan, they go to destroy Markal and save the Queen. On their way they meet Raelag and Shadya. After they defeated Queen Isabel's forces, Zehir goes through with the Rite of True Nature to purge the Queen's child from demonic presence, but Shadya transforms into the demoness Biara and takes the Queen with her into Sheogh. Zehir uses the Heart of the Griffin that Biara was carrying and they warp to Sheogh. In the end, Godric and his allies defeat Kha-Beleth and save the Queen.

When Isabel was proclaimed a Saint, he was replaced by his daughter, Freyda, to become the Queen's advisor. Godric hesitated, but was left in a position he cannot refuse, so told Freyda to be careful. When Freyda began to question Alaric and Laszlo, the Queen told her she had imprisoned Godric. In the end, Godric was severely wounded when Freyda came to him. He told her to never lose sight of her goals and succumbed to his wounds.

Godric is a Knight.

Godric, along with his sister, brother, and father, came and visited the forests of Irollan. Godric introduced both his siblings to Lasir. Godric went with Anwen to greet the guests from the Silver Cities. Before they could head back for the camp, Lady Delara sensed something was amiss, and ahead of them appeared a demon that attacked them. After fighting it off, Anwen smelled smoke, alerting Godric and the other two that the camp was under attack. After fending off several other demons, Godric and Anwen, along with Lady Delara and Nadia, made it back to the camp and found it set alight with Aidan frightened and Fiona harmed. Godric, shocked by his fathers death, and Lady Delara reporting that the secret relic in which she was sworn to hide disappearing, they head off to the portal set for the Silver Cities.

Godric stays behind with Lady Delara to fend off Azexes and buy the others time to escape. But the effort proves to be futile, resulting in Lady Delara's death, and Godric's capture.

With Anwen's help, Godric was set free and immediately stated his worry for his siblings. With learning of his Emperor's declaration of war with the elves, Godric set out to see the Emperor in his father's name to talk him out of the act. Weary and grieving, Godric returned alone to his beloved Griffin Empire. Soon upon entering the capital, Talonguard, Godric discovered his father declared a traitor by the newly appointed general, Count Carlyle, who was also responsible for the war on the elves. Joined by the knight Sir Varkas, who was also declared a traitor, Godric went to his Aunt Evelyn for help and learned from her that a tournament was being held, and the winner was to have a royal audience with the Emperor. In order to hide his identity and allow him to enter the tounament, Aunt Evelyn granted him with a different cape and an old helmet that used to be his Fathers. Godric had two objectives, to see the Emperor and put a stop to Count Carlyle's lies, and clear his fathers name.

Godric came to the Silver Cities with Anwen and Fiona to the meeting. However, they are ambushed by Azh-Rafir's minions, so Godric needed to fight Talsam, who used dark magic to weaken Godric's troops. Godric, Anwen and Fiona were soon captured by Azh-Rafir, but were freed by Fiona. Azh-Rafir soon summoned Aidan to use his Blade of Binding, so Godric went ahead and attacked his brother to bring Aidan to his senses.

After the victory at the Silver Cities, Godric re-unites with his siblings at Talonguard, where he is congratulated for his loyalty to the Empire. Eventually, his loyalty to the empire and faith in Elrath makes him a powerful knight, who serves his sister, Queen Fiona.

Godric introduction in Clash of Heroes 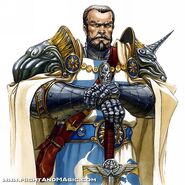 Godric's headshot
Add a photo to this gallery

Retrieved from "https://mightandmagic.fandom.com/wiki/Godric_(Ashan)?oldid=159759"
Community content is available under CC-BY-SA unless otherwise noted.