Count of the Bull Duchy (formerly)
Lord of Iluma Nadin

Dead (as of Tribes of the East)

"As any good friend would, he will die for me. We'll let his ghost choose the wine when we toast Arantir's success."
—Giovanni [src]

Lord Giovanni dela Segadora was a minor count in the Holy Falcon Empire of Ashan, a Vampire Necromancer, and the first mentor of the fallen Knight Ornella.

Giovanni dela Segadora both admired and harboured a venomous jealousy towards his sister, Lucretia, because she was first-born and he was not. Believing himself to be more competent than his sister in all domains, he used the death of the old Duke of Bull and the rise of his heir Ovidio as an opportunity to destroy Lucretia’s reputation and title, in effect causing her exile from the court. In the wake of Lucretia’s fall from grace, Giovanni was not above seducing Ovidio to obtain what he wanted most: power.OffBck

Giovanni was once a minor count of the Bull Duchy, but too far removed from the ruling line to hope for a position of importance. He ended up seeking power in a different way, following his sister Lucretia into the arts of the Necromancers. Now a powerful Vampire Lord, Giovanni controls an important region on the border with the Griffin Empire.OffBck

Giovanni and his sister Lucretia were lower administrators in the Bull Duchy, a region in the southeast of the Holy Falcon Empire. Though they were both clever and very skilled in playing political games, they were simply too far removed from the ruling line of the Duchy to ever gain any truly important position. Unsatisfied with this fate, they ended up searching power in a different way. Shortly after Lucretia was seduced to the ideals of Necromancy by Sandro, Giovanni also decided to become a servant of the spider goddess Asha, and in the ensuing centuries became a powerful Necromancer, though he objected at the thought of Lucretia siding with the undead.

Though he emigrated to Heresh after his conversion, Giovanni always remained close to the soil where he was born, probably being too much of a politician to abandon humanity completely. He gained control of the Vale of Sorrow in the northwest of his country, close to the Bull Duchy. He has set up a complicated network of contacts which allowed him to achieve his secret goals. Centuries past, the Falcon Empire was replaced by the Holy Griffin Empire, but Giovanni was always there behind the scenes.

Eventually, he met Amílcar, ruler of the Bull Duchy, who was humiliated by his own defeat by Ivan. Despite Amílcar's previous battles with the undead (as well as the hatred against necromancers), he joined with Giovanni, who provided him with Black Guard troops, but for a favor: to reclaim Iluma-Nadin, which was occupied by Bull Duchy's armies.

Giovanni, living in relative peace with his Human neighbors, felt no need to join Markal when he took control of the Griffin Empire and attacked the Silver Cities. In their hunger for revenge some Wizards refused to notice this difference, though. When they drove out the Necromancers, they attempted to grant Giovanni his final death despite the fact he had done nothing wrong. Realizing that his untrained skeletons would be no match for his enemies, Giovanni asked one of his contacts for help: a high-ranked member of the Bull Duchy named Lady Ornella, who had been Giovanni's friend and ally for some time.

In return, Giovanni promised to teach her some interesting secrets about death. Ornella accepted this deal and a combined army of Humans and Undead defeated the bloodthirsty spellcasters. However, Ornella's deed was considered as treason by her empire and she was exiled. Giovanni kept his promise and took Ornella as his acolyte. As such, the political talents of the clever vampire had once again turned the situation in his favour.

Not long after Queen Isabel's War, Necrolord Arantir appeared and began his quest to unite Heresh under his rule. Giovanni did not want to give up his autonomy, but he once again realized he could not defeat his enemy with his raw strength alone. Giovanni used Ornella to kill another contact, his old friend Lord Malfroy, and to take control of the important city Iluma-Nadin. He also made his acolyte discover the secrets around the that had appeared recently.

With these gifts he gained both Arantir's trust and a proper excuse to ask the mighty scholar to transform Ornella into a Necromancer himself. When Arantir was preforming the ritual Giovanni tried to backstab the High-Lord, but he failed and was killed himself instead. In his last moments he swore he would destroy Arantir in the next life. Arantir thankfully used Giovanni's network of cities and forces in his war against the demon Orlando. Ornella used the skills Giovanni taught her to loyally serve her new master.

Giovanni is a Necromancer.

The Union: Wishing to get more power and land, Giovanni teams up with Lady Ornella to capture the Silver Cities.

Last Soul Standing: Giovanni tells Ornella to conquer his friend Lord Malfroy, to present his lands as a gift to Arantir. Hoping that Arantir's guard is down, Giovanni attacks him, but is slain.

Giovanni is a Vindicator.

Giovanni is a Bone Guard. 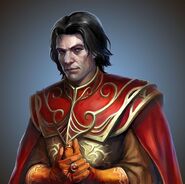 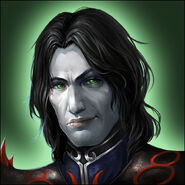 Giovanni's portrait in Heroes VII
Add a photo to this gallery
Retrieved from "https://mightandmagic.fandom.com/wiki/Giovanni?oldid=133585"
Community content is available under CC-BY-SA unless otherwise noted.