Gem is a female human Sorceress and Druid, appearing in every game from Heroes I to Heroes IV.

She is considered one of the finest Sorceresses and Druids, a veteran of the Succession Wars and the War of the Unholy Alliance, intelligent, conscious, and skillful in magic and scrying, but also sensitive and emotional. She scorns necromancy for the pain it brings to living creatures, and seeks consolation after all fright she witnessed during war. She has a flair for strategy as well as for philosophy debates, but tends to be naive when participating in causes for greater good.

Gem was one of the greatest Sorceresses that Enroth had ever seen, serving King Roland Ironfist during the Succession Wars. Shortly after Roland had secured the throne of Enroth, Gem left for Erathia, finding a new home in AvLee.OffBck

Even though Gem was at the center of over eighty years of wars and conflicts, she remained young and beautiful thanks to the waters of a special fountain. With the destruction of the old world, she no longer has access to those magical waters and is beginning to age normally again - something she desperately wants to avoid.OffBck

Gem is a Sorceress.

Gem is a Sorceress.

Gem is a Druid. She starts with basic Wisdom and First Aid.

Gem is a Druid.

"I don't think it's wrong to hate the hateful or not forgive the unforgivable. What I think is wrong is to let that hating and unforgiving turn a person into the thing they hate or won't forgive. I won't make that mistake again. I won't be like them."
—Heroes III, New Beginning campaign

Gem discussing "anti-necromancy" quest with Sandro in Heroes III: The Shadow of Death

Gelu and Gem artwork for Heroes III: The Shadow of Death

Gem portrait in Heroes I

Gem portrait in Heroes III: The Shadow of Death 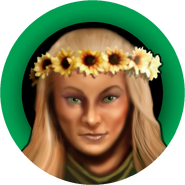 Gem portrait in Heroes I for Game Boy Color