Freyda Unicorn is a Haven Knight hero in Heroes of Might and Magic V and its add-ons, Hammers of Fate and Tribes of the East.

"Strike like lightning" is Freyda's motto. During her years as a student at the Imperial College of Strategy she often surprised her instructors with daring solutions based on forced marches, surprise attacks and rapid outflanking. At heart, Freyda is always impatient for the next battle to try some new twist on her favorite tactics. Though some murmured that she was promoted because she is Godric's daughter, a string of victories and exemplary leadership have silenced even the most cynical critics.OffBck

An aristocrat by birth and a warrior by upbringing (under the stern but caring hand of her father Godric), Freyda has been prepared since birth for a life of duty to the Griffin Empire. She fought in Queen Isabel's War, nobly acquitting herself on the field of battle. Her successes are often based on her ability to move rapidly and unexpectedly and her tactics are marked by the same quick cleverness as her occasionally sharp tongue.OffBck

Freyda was a noble strategist of the Holy Griffin Empire, daughter of Godric Unicorn. During Queen Isabel's War, shortly before Emperor Nicolai's death, she accompanied her father in his diplomatic mission in Silver Cities. Faced with failure, she helped her father with search for Isabel, who had been captured by demons.

During the aftermath of Griffin Empire's invasion of Silver Cities, when Godric refused to hand over the Amulet of Necromancy to Markal, she was taken hostage by the necromancer and brought to his castle, Lorekeep in order to bait the knight out of a fortified city. Released, she continued the training under her father's command.

Shortly after the creation of the Red Church and Isabel's canonization, Freyda was promoted to Lord High Constable of the Griffin armies, in place of her father. She was assigned a mission to deal with the rebels and recapture Prince Andrei, who had been taken by Lord Caldwell and Archbishop Randall to the border ground of Irollan. Accompanied by High Priest Alaric and Laszlo, she confronted and eventually defeated rebel troops and elves supporting them. Having learned of Andrei's location, the army set off to Horncrest, the capital city of Stag Duchy. During the march, however, members of the Red Church began to kill peasants and burn villages on the way, believing its inhabitants to be demon cultists. Starting to have doubts about Griffin Empire's new direction, she reported to the queen, only to learn that her father has been imprisoned for questioning Isabel's new policy. Forced to obey, while threatened with her father's fate, she captured rebel leader Duncan and ordered for him to be escorted to Talonguard.

Prince Andrei, however, was still missing - he had been sent by Duncan to a Dwarven city, Tor Hrall. Taking some of the older, loyal troops, she held an audience with the fortress's commander, Wulfstan. Negations were interrupted by Laszlo, who had attacked the border, against Freyda's wishes. As a a result, Freyda made her decision - she denounced loyalty to the Red Queen and began fighting Red Church's troops, once she escaped from Dwarven lands. Having found and released Duncan, she traveled to Talonguard, with the intention to free her father.

Once she arrived at Talonguard, she found Godric severely injured and tortured. While her father was dying in her arms, the two have been surrounded by Archangels. When her father's soul left his body, Elrath spoke to Freyda, asking her to receive his gift. She angrily screamed Laszlo's name - resulting in the knight being killed by a powerful, godly spell. Having successfully left the Griffin capital, Freyda returned to Horncrest, where she met Wulfstan, Duncan, dark elf Ylaya and the woman she recognized as the true Queen Isabel. She joined their ranks, promising to fight Biara, the succubus and the real identity behind the Red Queen.

Later during the war, she and Duncan met Archmage Zehir. The mage destroyed the illusion hiding the demons hidden in the ranks of Red Church knights. Hearing of Wulfstan's trouble, the wizard traveled to the Dwarven territory, leaving Freyda and Duncan at the Griffin territory. The two later joined him in his invasion on Talonguard - the capital city of the Griffin Empire, now filled with demons. After the false queen's demise and city's recapture, Isabel abdicated and announced Freyda the queen of the newly created Unicorn Empire, build on the ruins of the Griffin kingdom.

Freyda appears in Heroes of Might and Magic V and its add-ons, Hammers of Fate and Tribes of the East. 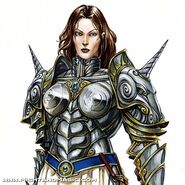 Freyda's headshot
Add a photo to this gallery
Retrieved from "https://mightandmagic.fandom.com/wiki/Freyda?oldid=158866"
Community content is available under CC-BY-SA unless otherwise noted.