This article is about the scrapped Heroes III: Armageddon's Blade faction. For the Might and Magic VII plot element, see Heavenly Forge.

Deyja
The Forge is a scrapped playable faction that was originally planned to appear in Heroes of Might and Magic III: Armageddon's Blade as the ninth available town in Heroes III. Carrying on the tradition of implementing aspects of both science-fiction and high fantasy in the games (which had been a factor in the Might and Magic series since its 1986 origin), the town was to be predominantly technology-oriented. Its alignment was Evil.

The Forge in the lore[]

The Heavenly Forges themselves were machines much akin to universal constructors (or glorified 3D printers), capable of producing extremely intricate, durable and effective equipment based on pre-loaded blueprints, seemingly out of thin air - as well as scanning the molecular structure of any existing equipment and duplicating it flawlessly and in what appeared to be unlimited numbers. Even low-tech, traditional weaponry such as daggers or spears turned out by the Forges was of such quality, that it looked as new as the day it was made even over a thousand years later. The Forges were created by the Ancients, a futuristic race that exists in the HoMM and MM universe known for having established a glorious civilization of high magic and technology and for conducting planetary-scale experiments on seeding worlds with life. Several such Forges were also present on Enroth, however after the intergalactic web that connected the Ancients' worlds with the Spinward Rim (the quadrant of the galaxy where Enroth and Axeoth, among others, are located) was heavily damaged by the alien race of Kreegans, the Ancients lost connection with the entirety of the Spinward Rim - an event known as The Silence. Without contact with the Ancients, no proper maintenance could be offered to the Heavenly Forges and one by one they eventually either failed and became inoperable on their own, or got destroyed in raids and stripped down for raw materials. The last Heavenly Forge ceased functioning in year 113 A.S. (after the Silence), and without the know-how from the Ancients, they couldn't be rebuilt and the entirety of the high technology they afforded was eventually lost, bringing a definitive end to what was later termed the Age of Wonders and kickstarting Enroth's long descent into barbarism.

Might and Magic VII: For Blood and Honor - The party of Might and Magic III's eight "Ultimate Adventurers" from Terra, strayed off course when pursuing Corak and Sheltem and crash landed on planet Enroth, in the sea east of the town of Spaward in Avlee. They donned their high-tech wetsuits and made their way out of their spaceship, The Lincoln, to the surface - where they were noticed by a Deyjan Goblin raiding party and an elven border partrol from Avlee, who had been engaged in a skirmish. The "sea people" were seen to engage in an argument, and promptly split into two factions, a "good" and an "evil" one. The good adventurers, led by Resurectra and joined by Crag Hack, Sir Caneghem and Robert the Wise, made their way to Bracada and became advisors to king Gavin Magnus. The evil adventurers, comprised of Kastore, Maximus, Dark Shade and Tolberti, instead travelled to Deyja and installed themselves as advisors to as-of-then king of the land, Archibald Ironfist. Uninterested with progress in studying the art of necromancy and more leaning towards ambitions of world conquest, Kastore and his fellows betrayed Archibald, formed a splinter faction in Deyja, and eventually managed to oust him and usurp his throne (with Kastore serving as the figurehead), casting Archibald out to a small island off the eastern shores of Avlee. During the events of Might and Magic 7's Dark path (the one originally intended as canonical), they soon turned their attention to recreating one of the Heavenly Forges with the intention of duplicating the Ancient weaponry (laser blasters and rifles) they had brought with them in their spaceship. The goal was to raise a technologically superior army and conquer the planet for their own benefit. They were able to find all necessary materials and parts on Antagarich, with the exception of one, known as the "Oscillation Overthruster", which they tasked the protagonist party with retrieving after the latter returned from assassinating the Kreegan leader Xenofex and rescuing Roland Ironfist from the Kreegan lair in Eeofol. The party later donned the Terrans' high-tech wetsuits and took a dive in the shoals just west of the town of Spaward in Avlee, where the Lincoln lay hidden beneath the sea; entered it, defeated the security droids, retrieved the Overthruster and thus the Heavenly Forge was successfully completed. Not long afterwards, rumors of an army of goblins armed with ancient weaponry being amassed in Deyja swept the land.

Heroes of Might and Magic III: Armageddon's Blade (Original) - In the original script for the Armageddon's Blade campaign, Gelu, Catherine and Roland, cornered by the superior military might of the Forge faction and on the brink of defeat, were supposed to obtain the Armageddon's Blade from of one the Ancients' vaults, and then use it to destroy the Heavenly Forge itself, which in turn would also immediately destroy all Forge towns and remove any evidence of the technology from the face of the planet once again. The threat of the Kreegans was initially supposed to have been neutralized with the assassination of Xenofex, thus making room for the new Deyjan army to be a world-threatening force and the antagonist of the campaign.

Following the completion of Heroes of Might and Magic III: The Restoration of Erathia, Gregory Fulton and Jon Van Caneghem began design work on an expansion pack, discussing plot points to pursue in the campaign storyline. They chose to pick up from the Evil ending of Might and Magic VII: For Blood and Honor, in which Kastore revives the Heavenly Forge and launches a conquest of Antagarich. To strengthen continuity between the two series, the Forge town was introduced to act as a representation of Kastore's armies.[1][2]

The Forge was first showcased at E3 in May 1999, months prior to the release of the retail Armageddon's Blade, with concept art by George Almond released to GameSpot and fansites, while a low-quality but discernable shot of the first draft of the town screen (designed by Phelan Sykes) had also been publicised. A unit lineup was released, with a comprehensive collection of renders of the Forge's structures and some promotional art later surfacing in Phelan Sykes' online portfolio.[3]

The Forge's introduction received a mixed reaction from fans, with some arguing against the inclusion of science fiction in what had formerly been presented as a high fantasy series - no sci-fi had appeared in Heroes I, II or III. Additionally, because Almond's sketch for the naga tank depicted partial nudity, some felt that the town would be a fundamentally distasteful inclusion. Several e-mails were sent to New World Computing, requesting that the Forge town be replaced (including a death threat), while a minority of posters threatened to boycott the title if the faction was introduced.[4][2][3]

Roughly a week after the concept art was unveiled, GameSpot's Micheal Mullen interviewed Gregory Fulton, Heroes III's designer, who revealed that the Forge had, in response to fan demand, been removed from Armageddon's Blade and was to be replaced with the Elemental Conflux faction, which had been on the drawing board for a second expansion pack.[5][6] Fulton, though still confident that science fiction had a central place in the Might and Magic storyline, agreed that the sudden introduction of the Forge had shocked a percentage of the fanbase, and had chosen to take the expansion in a different direction.[1] He later posted an FAQ in the form of an open letter to fans, allaying their concerns.[4]

The majority of information regarding the Forge town's dwellings and unique structures originates an earlier version of Phelan Sykes' online portfolio, where a full collection of renders were originally posted.[7] It also utilised Heroes III's standard structures, including the blacksmith and Mage Guild, though its favoured resources, spells and war machine were not confirmed.

No full information has been released regarding the statistics of the Forge troops, but their ranks are publicly known. According to a New World Computing representative, Forge units were to be, individually, the strongest in the game - though highly overpowered (with units stronger than Archangels), would be produced in low numbers and cost far more materials (even some non-7th tiers apparently costing precious resources).[8] In-game graphics of only the first three tiers were showcased.[9]

New World Computing revealed that the Forge's Might-based hero class was the Cyborg, while its Magic-based class was the Technician.[8] However, the identities for the individual heroes for each class were not detailed publicly, and no relevant official graphics are known to have been released. As a continuation of Might and Magic VII's Evil storyline, it is assumed at least that Kastore, Maximus and/or Dark Shade were to make appearances in the campaign storyline, playable or otherwise.

The storyline entailed the Erathians under Catherine Ironfist, Roland Ironfist and Gelu leading armies against Deyja (rather than Kreegan Eeofol) and destroying the Forge towns using Armageddon's Blade - a relic of the early plot is evident in the retail game's opening cinematic, which shows the heroes seeking the Blade, hidden within a subterranean cave. All but one of the campaign's maps had been ready at the time of the expansion's revision.[4]

A well-publicised fan project was commenced at Heroes Community by modders Bigjocker and Zielevitz to recreate the Forge as faithfully as possible and implement it into Heroes of Might and Magic III: In the Wake of Gods as an additional faction. Despite showing early evidence of progress, it has not been released as of yet.[10]


Also there are currently two active efforts to deliver the Forge town (that I know of).

A significant step for these projects occurred exclusively at Heroes Community. In June 2010, a mysterious HC member named benhur posted, for the first time ever, a full .RAR file containing the original animated graphic files from the Forge's town screen as it appeared at the town's original announcement at E3, apparently created by New World Computing's Phelan Sykes some ten years earlier. These assets are still available for anyone seeking to continue the project(s).[11] 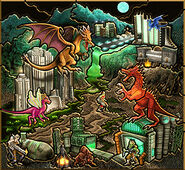 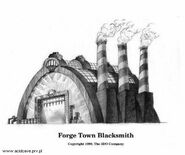 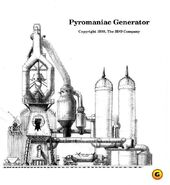