This article is about a Demoniac and a Death Knight of the Ancient universe. For other characters sharing her name, see Fiona.

Alive (as of Heroes IV)
Fiona is a female human Demoniac and Death Knight seen in Heroes III and IV.

Fiona was a trainer of circus animals in eastern Erathia before the Devils invaded. She quickly proved to them that her control over animals extended to the always temperamental hell hounds, and she was immediately accepted into the ranks of Eeofol's armies.OffBck

When the Kreegan empire crumbled after the Reckoning, Fiona made an attempt to return to human society here in the new world. Only a few months later, this harsh woman was running from the law. Now, she accepts the fact that she will never fit with her people again.OffBck

Fiona is a Demoniac. She starts with advanced Scouting.

Fiona is a death knight. 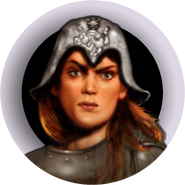