The faceless puppeteer is a creature in the Shades of Darkness expansion of Might & Magic: Heroes VI. It is the upgraded version of the faceless.

The Faceless Puppeteers own their name to their dreadful ability to penetrate a victim's mind and take control of the his or her body. The Puppeteer will impose itself into its host and bend it to its new master's every whim...OffBck

The faceless puppeteer is a solid Elite addition to the Dungeon forces, and has a number of advantages it may put to use against its enemies: its ability to strike without retaliation, its ability to purge positive effects from its target, and its Mind Leash power. Its large movement range lets it potentially attack a target on the other side of the field from its side of the map on the very first turn, and its strike and return feature helps stop enemies from striking back. However, its attack deals Dark damage, so its effectiveness will be hampered somewhat against fellow Dungeon faction members or Darkness Elementals, for example. Its Dark Purge ability is useful for dealing with heavily fortified opponents, but its cooldown is fairly long, so take care before using it. Finally, the Mind Leash ability, which may only be used once in a combat, and is only occasionally useful, as there are many creatures that are immune to its effects, and the effect only lasts until the creature takes damage, or for two turns. It is best used on a strong enemy creature that may attack from range or without retaliation, forcing the enemy themselves to strike the unit if they wish the effect to be gone.

The faceless puppeteer's strike and return ability is invaluable whether an army is besieging or being besieged, and a Mind Leash ability is equally useful for stirring chaos in the ranks in both siege lines and castle lines, buying valuable time.

When fighting a faceless puppeteer, try and aim for their significantly weaker Might Defense, and take advantage of their relatively low hit points for an elite unit. Shooters that deal Might damage are particularly useful against them. 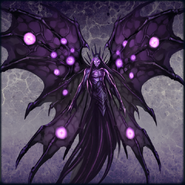 Artwork of the faceless puppeteer.

The faceless puppeteer emerging from the shadows using Shadow Strike. 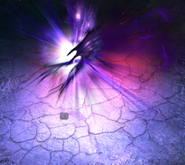