Edit
watch 02:23
Wiki Targeted (Games)
Do you like this video?
Play Sound

This article is about the creature from Heroes VI. For the Ashan race, see faceless.

The faceless is a creature in the Shades of Darkness expansion of Might & Magic: Heroes VI. Its upgrade is the faceless puppeteer.

The Faceless are the children of the Malassa. Masters of infiltration, spying, and stealth. The Faceless are the most mysterious and unknown of all the followers of the Dragon Gods. What little can be said of them is that they are clothed in shadow and mystery; if they are perceived at all it is a fleeting image from the corner of the eye, an odd moment of deja vu, a strange sense that one is being watched... The Faceless move in the shadows. They enter one shadow and leave from another. The Faceless don't need to speak, they can communicate by telepathy, from mind to mind. They are poorly trusted by their allies and greatly feared by their enemies.OffBck 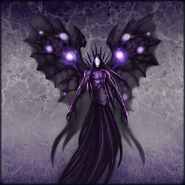 Artwork of the faceless.
Русский
Community content is available under CC-BY-SA unless otherwise noted.