This article is about the creature from Heroes of Might and Magic III. For other uses, see evil eye.

The evil eye is upgrade to the beholder, the third-tier creature of the Dungeon faction in Heroes of Might and Magic III. It can be recruited from the upgraded pillar of eyes.

Beholders and evil eyes can attack at range with rays projected from their eyes. At close range they attack with equal damage using their multiple tentacles.OffBck

It has slightly higher attack, defense and speed than the beholder, and twice as many shots. For the small increase in price, it is a useful upgrade. Since there's no increase in hit points, the evil eye is just as vulnerable to spells as the beholder. 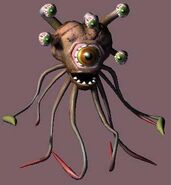