"Vengeance will not override me from my duties to the clan, Tholos. No enemy will set foot here as long as I have a whip to fight them."
—Eruina, to Tholos [src]

Eruina is a true daughter of the legendary Queen Tuidhana. Though Eruina herself does not flaunt her prestigious bloodline, preferring to be judged on her impressive abilities, the Shadow Witches and Shadow Matriarchs of her army support her attacks with all the fury of true fanatics.OffBck

Eruina was one of the children of Queen Tuidhana, whom escaped the destruction of the Dark Elf Kingdom after the Day of the Tears of Fire in 566 YSD. Looking for refuge, in 568 YSD she settled down in the caverns under Farwind island and made a pact with Rutger, the local leader of the Falcon Empire who ruled the surface of the island. However Rutger sold her out to his Elven allies, who dispatched the hero Talanar to destroy Eruina and her people. To make matters worse a neighboring Dark Elf named Sinitar craved to take her land and eliminate her, even going so far as to try and bargain with the Humans and Elves.

As beautiful as she is proud, Eruina is the daughter of a Dark Elf lord named Salvin and Queen Tuidhana herself. The last consort of the legendary Queen, Salvin took his daughter away from the court at an early age and raised her in a strict, but caring, way. Salvin was the first to understand the need for the Dark Elves to stop wandering the caves and establish a real kingdom. Eruina and her father ultimately parted ways, having different opinions about the nature of said kingdom. Eruina took her followers to the small island of Farwind, in the Irisus Sea, and there she founded the short-lived kingdom of Inshanost. Attacked relentlessly by both Humans and Sylvan Elves, and undermined by internal dissensions, Inshanost eventually fell. After hearing of her father's tragic demise during his own attempts at founding a kingdom, Eruina decided to return to the rest of her brethren. She chose not to side with any particular clan, and would rather be known for her own achievements than because of who her mother was.OffBck

Eruina is a dark elf who has set up camp in the Tomb of a Thousand Terrors (Floor 4) with her companions. She is one of the few masters of Dark Magic.

Eruina is a true daughter of the legendary Queen Tuidhana, and the half-sister of Menan, the current Lord of the Clans. But she never points up this brilliant lineage. Proud and independent, she doesn't side with any particular clan, and would rather be known for her own achievements than because of who her mother was.OffBck

Eruina has 9 Attack, 4 Defense, 10 Spell Power, 4 Knowledge at Level 15 (with all modifiers applied).

Eruina's stats as a Duel Hero

Greaves of the Dwarven Kings

Trident of the Titans

Eruina has 7 Attack, 6 Defense, 16 Spell Power, 4 Knowledge at Level 15 (with all modifiers applied).

Eruina's stats as a Duel Hero

Tribes of the East[]

Eruina is a Magic member of the Dungeon faction. As such, her default class is Sorcerer. While her Dynasty character is listed as a Dark Prophet, she may be developed however the player chooses when used in a game.

She has some answers to what is happening in the greater picture. Eruina tells you about mysterious elf and Erebos's secret. She will agree to train your party members for 1500 Gold in Master Level of Dark Magic.

Out of the Darkness

Eruina is a Dark Prophet. 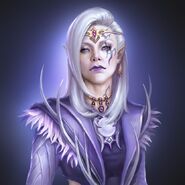