Ergal was an arch devil among the ranks of Sheogh who acted as an agent and spy in Irollan, posing as an Elven War dancer. With his skills at espionage, he was instrumental in organising and plotting the burning of Brythigga and the first Elven capital on the Day of the Tears of Fire.

Ergal is a pit lord, an agent of Hate, but he takes his sadistic enjoyment at manipulating others to a much higher level than most. He will select one man or woman who is a perfectly good example of their kind and keep taunting, torturing, and tricking them until they become nothing more than a shell of their former self. There are a long line of heroes who have fallen to his games. Ergal would tell that is how he feeds, and he is always starving.

Acting as Tieru's ally and friend, Ergal was the first to inform the Ranger of the resultant death of High King Arniel, leading Irollan to believe Tuidhana's dark elves had caused the fire. Tieru embarked on a vengeance quest, murdering the Dark Elves and their Mariner cousins in alleged retribution. Afterwards, Ergal privately revealed his true nature to Tieru, explaining his role in Arniel's death. By spreading false rumours of Tieru's insanity, he planned to use his own sudden disappearance as a catalyst for Tieru's banishment. The Ranger swore vengeance, but Ergal escaped.

In 585 YSD, the Dragon Knights brought forward evidence of Ergal's involvement, clearing the dark elves of their accusations. However, Ergal's fate remains unclear.

Ergal is a Hell Knight.

Ergal appears in Tribes of the East and in the Might & Magic: Heroes VII add-on, Trial by Fire.

Ergal in his true form 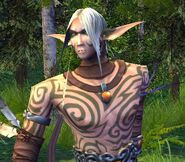 Ergal as an elf
Add a photo to this gallery
Retrieved from "https://mightandmagic.fandom.com/wiki/Ergal?oldid=158532"
Community content is available under CC-BY-SA unless otherwise noted.