This article is about the creature from Heroes of Might and Magic III. For other uses, see dwarf.

The dwarf is a second-tier creature of the Rampart faction in Heroes of Might and Magic III. It can be recruited from the dwarf cottage. The dwarf can be upgraded to the battle dwarf.

Because of their slowness, dwarves are perhaps best used to defend ranged attackers. Dwarves and battle dwarves have, respectively, a 20% and 40% resistance to magic which gives them a chance to ignore the effects of hostile spell attacks.OffBck

As a slow, but sturdy defender, the dwarf is best kept in the town, so that it doesn't slow the army down. The magic resistance is very useful in battle. 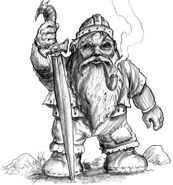 Dwarf's artwork from the game manual