Might and Magic Wiki
Register
Don't have an account?
Sign In
Advertisement
in: Heroes V characters, Hammers of Fate characters, Tribes of the East characters,
and 3 more

For other uses of Duncan, see Duncan.

"We'll have to find Duncan. Luckily he has other talents besides chasing women."
—Freyda [src]

Duncan is a Haven Knight hero in Heroes of Might and Magic V add-ons, Hammers of Fate and Tribes of the East.

Though Duncan is from an ancient family whose lands (and blood) come from none other than the fabled Falcon dynasty, as a youth his heart longed not for the sumptuous halls of royal palaces but for expanses of sunlit fields, for dusty roads and for the adventures that lay in wait. Impatient with aristocracy and aristocrats, Duncan devoted his life to wandering, and there are few places left in the Kingdom which he hasn't visited yet.OffBck

Duncan was the leader of the rebels who opposed Isabel's rule. He was captured, but later freed by Freyda to restore things in the Griffin Empire. He went to his friend Wulfstan to aid him in the fight. They came to Horncrest, the capital of the Stag Duchy, and re-claimed it. They joined with Ylaya and the true Queen Isabel to defeat King Tolghar.

Later, he and Freyda met Zehir, who cleansed the land of demonic magic. With this, they managed to make an alliance with the Red Church and attack the demons. They came to Talonguard, where they fought against Biara's forces. Isabel abdicated and named Freyda the Queen, while Duncan became the King of the new Holy Unicorn Empire.

Tribes of the East[]

Duncan appears in the Heroes of Might and Magic V add-ons, Hammers of Fate and Tribes of the East. 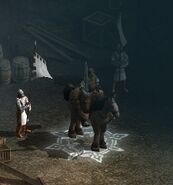