For other uses, see druid.

The Druid is an elven character class in Might & Magic X: Legacy.

Druids are the priests of Sylanna, Elemental Dragon of Earth and living embodiment of Nature. As such they are granted control over the magic of the elements, which they call upon in times of peril.

The Druids, compared to the human Freemages, are still closer to nature and the elements. This reflects in them being a bit more resilient - it's not uncommon to meet Druids wearing a spear instead of magic foci. They favor earth, water and prime magic and have mastered the art of channeling mana through mysticism, which enables them to reach the biggest mana capacity of all classes.

The Advanced Class of the Druid.

The title of Druid Elder is received in a dream. The Dragon Goddess of Earth, Sylanna, visits a Druid and asks them to dedicate their lives to the protection of Asha's creation and Sylanna's gardens. The title is confirmed by two other Druid Elders who come to the Druid saying, "I saw you and the Dragon in my dream. Welcome child of Sylanna."

The Druid Elder’s spell "Harmony" calms all enemies. Only those close to the party will regain their hostility. 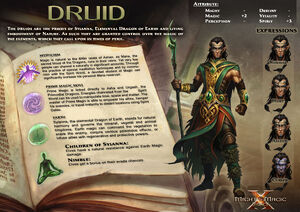 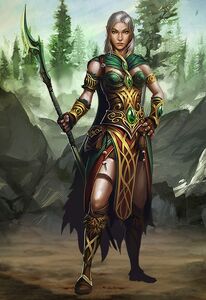 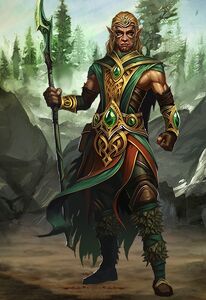 Druid Male
Add a photo to this gallery
Retrieved from "https://mightandmagic.fandom.com/wiki/Druid_(MM10)?oldid=134227"
Community content is available under CC-BY-SA unless otherwise noted.