For other characters of the same name, see Drake.

Image from the manual

"Hero of the present age, Drake is the young warrior upon whose shoulders lies the fate of the world as we know it."
—Manual

Drake is the main character of Crusaders of Might and Magic. He is a hero of prophecy, fated to destroy the Legion of the Fallen and its leader Necros.

Drake was the son of a shepherd, and was born in a peaceful village on the Fairfield Lowlands. At the age of six, he single-handedly saved his flock from a pack of wolves with nothing but a lit torch and determination. His father boasted that the boy had a warrior's spirit, but the village seer told him that Drake had magic within him.

When he was twelve, a mortally wounded Crusader staggered into the village, warning them that the Legion of the Fallen was drawing near. The town leaders prepared to defend the village, but Drake's father ordered the boy to return to the animals. As Drake collected the flock in the mountains, he heard screams echo through the canyon, and turned back to see that the Legion had arrived.

Drake ran back home, but by the time he arrived at the village, everyone had been killed, and the only thing that moved was a handful of the Legion's soldiers that had remained behind to search through the wreckage for weapons. Drake encountered the Crusader, who was now part of the undead army. The man swung his sword, scarring Drake's cheek before the boy impaled him on a burning pole. Realizing that there was nothing left for him in the village, Drake fled into the wilderness.

Drake spent the next ten years searching for distant relatives in other villages, but he found that they had either been killed or forced to flee far away. He started to hang out with mercenaries, thieves, and gypsies, who taught him deception, swordsmanship, and stealth. His hatred for the Legion grew stronger, and he started to raid their encampments at night. Legends and stories about "The Scarred One" spread through the countryside.

One night, Drake was attacked by ogres while sleeping in the forest, but he was saved by the blind hermit Nomandi. Nomandi took Drake back to his monastery and told him that he was a hero of prophecy. The Book of Ages had foretold the coming of a "Scarred One" that could defeat the Legion. He took Drake in as his apprentice, though Drake never quite believed that he was actually a "hero of prophecy".

When Drake was ready to leave the monastery, Nomandi walked with him outside the gates, but they were attacked by the Legion's soldiers. Nomandi was mortally wounded, and knew that if he died by the Legion's hand, he would become one of them. He begged Drake to give him a "sleeping potion" that would end his life before he died from his wounds, and Drake reluctantly complied.

Just before he passed away, Nomandi told Drake that the Legion wouldn't have traveled so far if they hadn't been searching for something. "They were after you, Drake. They know you're dangerous." Drake buried his mentor, then vowed to hunt down "every last festering corpse in the Legion army".

In Warriors of Might and Magic, the hero Alleron finds Drake's corpse in the dungeons of Monastery of Enroth.

Drake in the ruins of his village 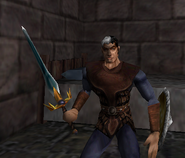 Drake from the PC version 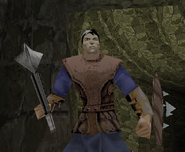 Drake from the PS1 version

Loading image
Add a photo to this gallery
Retrieved from "https://mightandmagic.fandom.com/wiki/Drake_(Ardon)?oldid=148863"
Community content is available under CC-BY-SA unless otherwise noted.