"Rumor has it that black dragons dwell in these caverns, which means their treasure is hoarded here as well."
—Heroes IV description

In Heroes I, it is defended by a small amount of dragons. When the guardians are defeated, the Dragon City grants 1000 gold per day and has a small host of dragons defending it.

In Heroes II, the Dragon City is guarded by green dragons, red dragons, and black dragons. If the hero is victorious, they can hire dragons here.

In Heroes IV, the hero fights black dragons and is rewarded with gold, and relic and major artifacts. 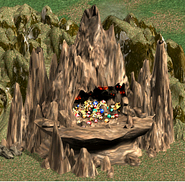