Deleb is a hero appearing in Heroes of Might and Magic V and Might & Magic: Heroes VI.

Don't confuse Deleb, a servant of the Overlord of Pain, Ur-Traggal, for a Succubus. She's not. And to prove it she'll gladly invite you to test out her latest mechanical contraption; a machine that's liable to flay or burn or sear your skin in a never before imagined way. Not without a smile, of course.
Being a Master of Fire Magic she could happily talk for hours about the difference between a burn and a scorch or a brand and a scald, but she'd much rather show you.OffBck

One of the generals charged to refit Kha-Beleth's prison to better suit his own needs, the demoness Deleb developed an intricate knowledge of machines. Nicknamed "Meat Grinder" by her detractors, Deleb puts unquestioning faith in her own engines of war rather than trusting to fickle Demon troops, whose loyalty is a constant balance between terror of their masters and terror for their lives.OffBck

Deleb appears as a hero card. She is the leader of the Inferno faction. 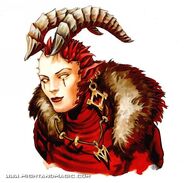 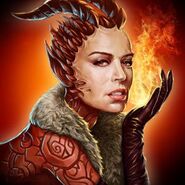 Deleb's artwork in Duel of Champions

Soulfueled pyre fortune card
Add a photo to this gallery
Retrieved from "https://mightandmagic.fandom.com/wiki/Deleb?oldid=149448"
Community content is available under CC-BY-SA unless otherwise noted.