This article is about a Dragon Knight of Malassa and mother of the Griffin heirs. For her twin sister, see Cate. For other characters sharing her name, see Deirdre.

Cate, wife of Duke Slava, and mother to his four legitimate children, is the only surviving child of Duke Connell, of the Stag Duchy. Her brothers and sisters were all killed, or reported missing, during the war with the rebel Elf Queen Tuidhana, that took place in her homeland.
She abandoned the House of Griffin shortly after her elder daughter, Irina, was promised by Emperor Liam Falcon to Gerhart, the hated duke of the Wolf Duchy.
However the event was not the trigger that incited her departure.
It was rather her desire to resolve the disappearance of her younger brother, Kieran.
During her travels she discovered many things including her own inner dragon, and chose to become a Dragon-Knight of Malassa, the Dragon of Darkness.
One day she hopes she will receive, if not her children’s forgiveness, then at least their understanding.OffBck

Deirdre was born a daughter of Duke Connell of the Stag Duchy, along with her twin sister, Cate. At a young age, she was promised to Duke Gerhart Wolf in an arranged marriage. When Emperor Liam Falcon invaded the lands of Queen Tuidhana, starting the War of the Bitter Ashes, the elves retaliated and burned her father's castle. As a result of the fire, all of her family either died or was declared missing. Seeking to escape her fate as a bride to the Duke of Wolf, she assumed the identity of her deceased twin sister, henceforth posing as Cate Stag.[1]

While Gerhart did not see through this act, he was bitter at the news of losing his future wife and demanded "Cate" to become his wife, just like "Deirdre" was supposed to. His demand was rejected however, as Deirdre married Duke Slava of Griffin Duchy instead, becoming known as Cate Griffin. Furious at this decision, Gerhart developed a strong grudge against Slava and the House of Griffin.

She became a mother to four of Slava's children – Anton, Irina and twins, Kiril and Anastasya.

Shortly after her first daughter, Irina, was promised to Duke Gerhart in an attempt to bring conciliation between the dukes, Deirdre left the Griffin Duchy in order to search for her long-lost brother, Kieran. During her travels, she came to know Tuidhana's son, Raelag. They became close partners, enough for Deirdre to reveal her true identity to him, which led Raelag's companion, Yrris to tease him about it later on.

She eventually joined the order of the Dragon Knights, and discovered that her inner dragon was Malassa, the Dragon God of Darkness, also known as the Keeper of Secrets. Cate perished during the final battle against Michael, either killed by the ritual that sent the angels back to Elrath, or slain by the Griffin heirs, depending on the player's actions. 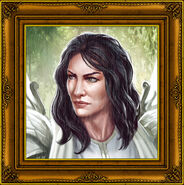 Add a photo to this gallery

Retrieved from "https://mightandmagic.fandom.com/wiki/Deirdre_(H6)?oldid=150137"
Community content is available under CC-BY-SA unless otherwise noted.