For other characters of the same name, see Darkstorm.

Alive (as of Heroes IV)
Darkstorm is a minotaur hero from Heroes III and Heroes IV.

Darkstorn challenged his way through the ranks of warriors of Nighon, secretly using magic to ensure he won each battle. Once in a position of power, he finally revealed his true powers. None have challenged him since.

Darkstorm has proven time and again that any who challenge him meet a quick end. He continues to be a dangerous and powerful presence in this new world where his reputation precedes him like the dark clouds before a thunderstorm.

Darkstorm is a Warlock. He starts with basic Wisdom and Learning. 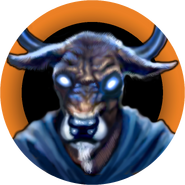