"Dark Messiah" redirects here. For the character known as the Dark or Demon Messiah, see Sareth.

Dark Messiah of Might and Magic, additionally subtitled Elements on Xbox 360, is a first-person action game developed by Arkane Studios and Floodgate Entertainment. Kuju Entertainment developed the multiplayer mode. The player controls Sareth, the apprentice of the wizard Phenrig, after he is sent to the city of Stonehelm to accompany an expedition trying to retrieve a powerful artifact known as "The Skull of Shadows."

Elements was released on February 12, 2008, over a year after its debut on PC. It adds new levels in the single-player campaign, a revamped multiplayer mode, numerous bug-fixes, and adjustments for the console experience.[1]

The game emphasizes environmental combat, by way of using scripted traps or terrain features. Actions include cutting ropes to release heavy objects, kicking enemies over a cliff or into a bed of spikes, and breaking support beams to collapse a structure and crush enemies underneath.

Enemies are generally difficult to kill in straightforward combat, although characters developed for this purpose may have an easier time. Characters with high stealth can sneak up behind enemies and perform a lethal backstab maneuver, while players skilled with a bow can use it to snipe enemies from a distance.

Magic spells can be used to damage the enemy, heal the player, or serve a number of utility purposes.

As the player completes objectives throughout the game, Dark Messiah awards experience points that can be used to buy skills in one of three skill trees: Combat, Magic, and Miscellaneous. The Combat tree improves the power and efficiency of physical attacks. The Magic tree grants access to new spells. The Miscellaneous tree contains general improvements, including Stealth.

Although some enemies will drop unremarkable, normal items when killed, looting in Dark Messiah is mostly a fixed affair. Valuable items are placed in specific locations for the player to find. Each item has fixed stats, and the selection of items is also limited, with only a small number of different weapons or armor in each category. Additionally, advanced items typically have a skill requirement, with the end result being that the character equips only a handful of different items over the course of the game, as allowed by skill selections.

The protagonist of Dark Messiah is a young man named Sareth, who is under the tutelage of the Wizard Phenrig. After years of studying the arts of magic and physical training in the arts of war, he is finally taken on an expedition to retrieve a rare artifact known as the Shantiri Crystal. After finding the Crystal and disposing of the would be rival expedition, Sareth is tasked to bring the crystal to an associate of Phenrig's, the Wizard Menelag, who is also the lord of the city of Stonehelm. Menelag and Phenrig have certain "mutual interests" that involve finding an artifact called the Skull of Shadows. Menelag apparently is unable to continue his search without the Crystal. To guide him on his way, a spirit named Xana will reside in Sareth's mind.

Shortly after arriving in Stonehelm, Sareth witnesses an undead cyclops and a small army of ghouls sent by the Necromancers breach Stonehelm's defenses and begin to overwhelm the guards. Sareth is recruited to help in the defense effort by taking control of a ballista. Using this, he manages to stun the undead cyclops long enough for a guard to stab it in the eye, thus killing it. Seeing their most valuable asset destroyed, the remnants of the invading force beat a hasty retreat. Sareth then resumes his search for Menelag. Upon reaching the front gate of Menelag's manor, Sareth is greeted by Leanna, the young niece and pupil of Menelag. That night, the three enjoy a small feast in Sareth's honor after which Menelag informs Sareth that they will set sail the following morning to resume the search for the Skull.

In the middle of the night, the crystal is stolen by a ghoul, who murders Menelag in the process. Sareth then chases the ghoul to a warehouse, where he finds the necromancer Arantir using the crystal's power to open a portal to Nar-Heresh, the necromancer city. Sareth manages to steal the crystal back and escape to the docks, where he falls asleep. In a dream, he recalls his meeting with Phenrig, except that Phenrig appears to be holding Sareth by a leash. He also sees Xana again, but as she transfers her consciousness into his mind, she appears to be a demon. Sareth and Leanna leave Stonehelm by boat and travel to the island with the Skull of Shadows. While en route, Sareth has another dream in which he kills Leanna, and Arantir alludes that she is only the first of many victims.

After arriving, they find the expedition destroyed, and most of the men dead, killed by orc warriors. Sareth and Leanna are chased into the Temple of the Skull by a Pao kai which Sareth kills a little later with a gate, and Sareth proceeds alone to the top of the Temple, where he places the Shantiri Crystal, and defeats the Orc chief Aratrok in a duel. Arantir then reveals himself and appears to kill Leanna. Sareth, however, escapes to the crypt below and retrieves the Skull of Shadows. Sareth then has a vision of the Demon Sovereign Kha Beleth, who reveals himself to be Sareth's father. Kha Beleth names Sareth the Dark Messiah, and then commands to be released using the power of the Skull. Sareth wakes up to see Arantir, who takes the skull and then impales Sareth on a spike.

Fueled by Xana's demonic power, Sareth wakes up alive and gains the power to transform into a demon, which grants him uncanny strength at the cost of health. Stripped of all his belongings, Sareth uses the demon form to fight off the Orc guards as he recovers his items. He manages to leave the island and returns to Stonehelm. Once there, he takes the portal to Nar-Heresh. There, Sareth witnesses Leanna – who is still alive – being thrown into a spider pit. Saving Leanna is optional, but impacts the possible endings that the player may receive. Regardless of the player's choice, Sareth discovers Arantir's plans to sacrifice the entire population of Stonehelm in order to permanently seal Kha Beleth's prison.

Sareth then returns to a besieged Stonehelm, fighting alongside the remaining human resistance. If Leanna was rescued in the previous chapter, Sareth may visit the sanctuary in order to purge Xana from his body. If Sareth proceeds with the cleansing, he loses the ability to transform into a demon, but gains the ability to use powerful holy weapons. If Sareth is unable or unwilling to undergo the cleansing ritual, nothing will change. Whatever the case, the choices determines which endings the player may receive.

In the ancient necropolis over which Stonehelm was built, Sareth is eventually reunited with Leanna. If the player left her behind in the spider pit, she appears as a Lich, who Sareth then destroys. If Sareth saved her, but did not cleanse himself, she will attack him. If Leanna was rescued and Sareth cleansed himself, she will join Sareth in the final chapter.

Sareth then makes his way through the necropolis and eventually catches up with Arantir as he is about to perform the ritual. Sareth kills Arantir, but Arantir revives himself and summons an undead Pao Kai. Sareth fights off the Pao Kai, which forces Arantir to perform a resummoning, during which Arantir is vulnerable. Eventually Arantir is defeated, leaving Sareth to make his final decision for the Skull.

The player may use the Skull to lock his father away forever, or destroy the Skull and free his father. Each option offers a different ending. The ensuing cut scene will vary slightly depending on whether it is Leanna or Xana that accompanies Sareth at the end of the game, giving the game a total of four different endings.

Dark Messiah features a multiplayer mode that is similar to the gameplay of the Battlefield series in that opposing teams battle each other and earn points by performing strategic maneuvers across a large map. There are two playable factions, consisting of humans and undead, along with five playable classes. The character customization system is still present, with the limitation that players must select a predefined class and may only buy skills available for that class.

As a throwback to Rocket Arena, there is also a Colosseum mode, in which players fight individual opponents in front of an audience. When players are not battling in the current match they can bet XP on the outcome.

Critical reaction to Dark Messiah has been divided, particularly between the US and the rest of the world. IGN, for example, gave mixed reports with their Australian team awarding the game 8.8/10 and their American team awarding it 7.0/10.

Praise for the game came from PC Zone (UK), PC Gamer (UK), and Game Informer (USA) which awarded the game 84%, 88% and 9.25 respectively, with praise going to the game's innovative and responsive melee combat. Game Informer, in particular, praised Dark Messiah for the sheer fun factor and beautiful graphics. In contrast, several publications from the US gave poor reviews. GameSpot gave the game a review score of 6.7/10 stating that it had many technical issues, repetitive gameplay, predictable story, and poor multiplayer. CNET and GameSpy each gave similar reviews with the latter giving it 3/5. 1UP.com gave the game only 4/10, criticising the over-reliance on using the kick as a weapon and dubbing it "The Adventures of Sir Kicksalot Deathboot in the Land of the Conspicuously Placed Spike Racks".

Overall, Metacritic assigned the game an aggregate rating of 72% based on 44 reviews.[2] On Game Rankings, the game received a score of 75% based on 50 reviews.[3]

Elements on the Xbox 360 fared significantly worse, receiving an aggregate score of 54%.[4] IGN noted that this version simplified the original game's role-playing element; players in Elements must choose one of four predetermined character classes that gain skills according to their specialty.[5] Gamespot criticized the game's control problems and graphics, stating that it "may be the ugliest game powered by the Source engine".[6] GameSpot nominated this version for the dubious award of Flat-Out Worst Game in its 2008 video game awards.[7]

Despite having received a "not under 18" rating from the USK, Ubisoft announced that the two German versions of Dark Messiah will contain some changes from the internationally released version.[8] Specifically, the German version does not allow for enemies' heads or limbs to be severed, enemies cannot be impaled after death, burning enemies will die immediately and their corpses cannot be mutilated further after death. Ubisoft separately released a limited edition "International Version" of the game (playable in English only) which is identical to the version of the game released in most other countries, and which was also released in Germany. However, since then the Bundesprüfstelle has declared, after an examination in February 2008, that the uncensored version of the game, though heavily relying on melee combat and displaying violent content, is not harmful to minors, as equal importance is laid on the setting in a fantasy world and the elaborated storyline. In a second attempt, the original version secured a "not under 18" rating with the USK, though this now rated version has yet to be released in Germany. 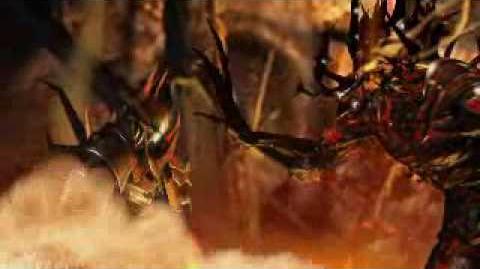 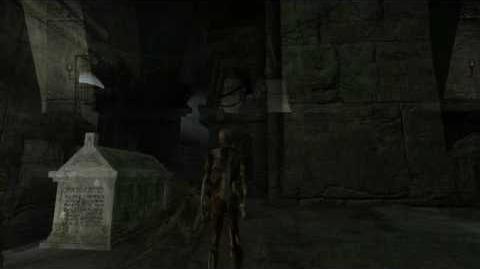 Dark Messiah of Might and Magic GC Atmospheric Trailer US (2006, Ubisoft) HD 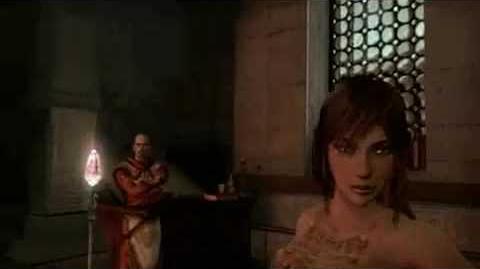 Dark Messiah of Might and Magic Official Launch Trailer (2006, Ubisoft) 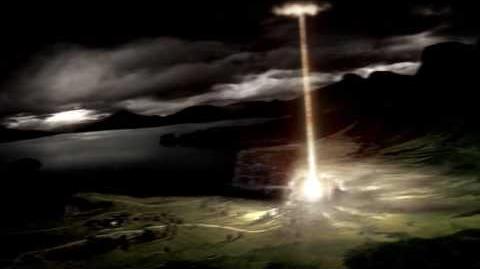 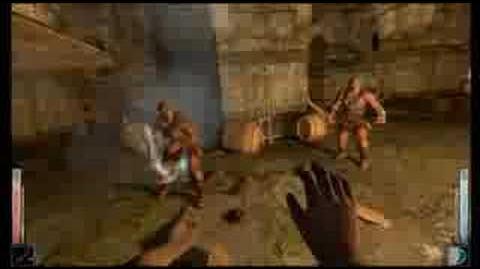 Retrieved from "https://mightandmagic.fandom.com/wiki/Dark_Messiah_of_Might_and_Magic?oldid=146754"
Community content is available under CC-BY-SA unless otherwise noted.