This article is about the creature from Heroes of Might and Magic III. For other uses, see crystal dragon.

The crystal dragon is a dragon-like golem first created on Enroth which appeared in Heroes of Might and Magic III: Armageddon's Blade. It can be recruited at the crystal cavern.

Made entirely from red crystal and brought to life through magical means, the Crystal Dragon is literally semitransparent, lit from the center by its magical heart. Used frequently as a training tool for young dragon slayers, many wizards also create these creatures for the crystal they shed.OffBck

Unlike most dragons, the crystal dragon can neither fly, nor does it have a breath attack. It more than makes up for this, however, by being the second strongest creature in the game, with very high stats, and a 20% Magic resistance. Second in raw power only to the azure dragons, they are ranked at tier 10.

The Crystal generation lets the kingdom generates 3 crystal for the hero that owns it. The amount does not increase with additional crystal dragons and will always stay at 3 crystal per week.

They can also be resurrected, probably due to their magical heart, even though they are considered to be golems. 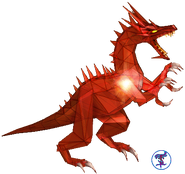 Crystal Dragon model as rendered by Tracy Iwata
Add a photo to this gallery
Retrieved from "https://mightandmagic.fandom.com/wiki/Crystal_dragon_(H3)?oldid=158264"
Community content is available under CC-BY-SA unless otherwise noted.